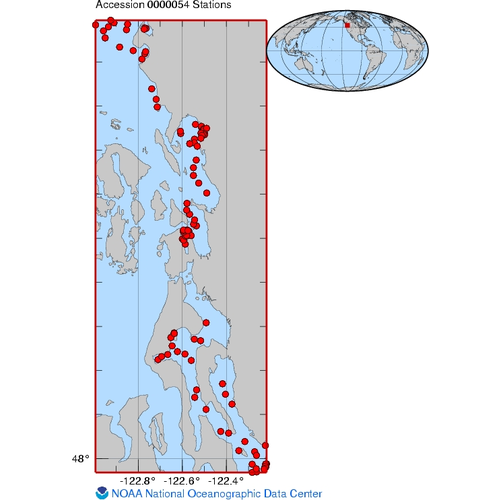 Preview graphic
As a component of a three year cooperative effort of the Washington State Department of Ecology and the National Oceanic and Atmospheric Administration, sediments from 100 locations in northern Puget Sound were tested to determine their relative quality. The purpose of this survey was to determine the quality of sediments in terms of the severity, spatial patterns, and spatial extent of chemical contamination, toxicity, and alterations to benthic infauna. The survey area encompassed the region from Port Gardner Bay north to the US / Canada border, excluding the San Juan Islands. Surficial sediments were tested and analyzed from each of the 100 locations. Data from the chemical analyses indicated that toxicologically significant contamination was restricted in scope to a relatively small portion of the region. The spatial extent of relatively severe contamination varied considerably among chemicals; however, less than 2% of the area was considered contaminated for most substances. Sediments from several sampling locations within Everett Harbor often had the highest chemical concentrations. In addition, samples from some stations in Bellingham Bay and other locations scattered throughout the study area had elevated concentrations of some substances. Data from four kinds of toxicity tests indicated a similar pattern: the degree of toxicity was highest in samples from Everett Harbor followed by those from other locations scattered within the survey region. The spatial extent of significant toxicity ranged from 0% to 5% among the toxicity tests. Wide ranges in several numerical indices of benthic infaunal structure indicated good correspondence with tests of toxicity and the concentrations of numerous chemical substances. That is, there was evidence of altered benthic populations in some areas nearest urban centers. Chemical contamination and toxicity of sediments were less severe in northern Puget Sound than in many other estuarine areas studied in the U.S. by NOAA. Results from similar analyses of samples from the central Puget Sound (sampled in 1998) and southern Puget Sound (sampled in 1999) will be compiled with the data from northern Puget Sound, to provide a broad-scale evaluation and quantitation of the spatial scales and patterns in sediment quality throughout the entire region.
Dataset Citation
Dataset Identifiers
ISO 19115-2 Metadata
gov.noaa.nodc:0000054
Full Text · XML
Last Modified: 2020-06-15T18:34:00Z
For questions about the information on this page, please email: ncei.info@noaa.gov