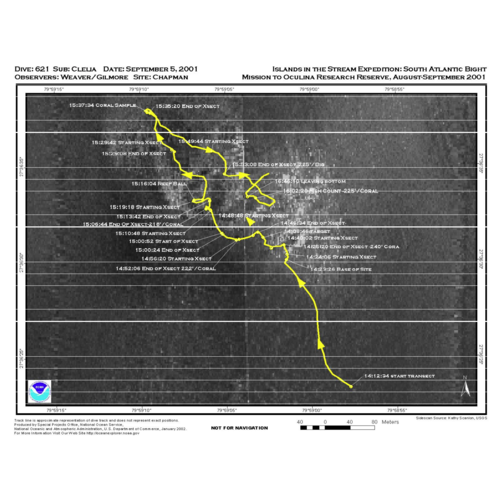 Preview graphic
Islands in the Stream is a three-month scientific expedition to marine protected areas and other habitats being considered for protection from offshore of Belize in Central America to North Carolina’s continental shelf. "Islands” are the coral reefs and hard-bottom (also called “hard substrate”) biological communities found along the course of a massive “stream” of ocean currents connecting the Caribbean Sea, the Gulf of Mexico, and the western Atlantic off North America. This expedition emphasizes habitat characterization and an understanding of these islands' "connection" as parts of an interrelated ecosystem. Though separated by large expanses of ocean water, the fishes, corals, and invertebrates common to these islands may demonstrate that the health and vitality of “downstream” islands are linked closely to those located “upstream."

From August to October, scientists explored the deep reef and hard-bottom communities of the South Atlantic Bight, from the east coast of Florida through the North Carolina Shelf. Leg One of this mission, lasting from August 29 to September 7, visited the Oculina Bank, situated 30 km (18 mi) east of the northern Florida coast. Oculina Bank was the first deep-water site in federal waters off the U.S. Eastern Seaboard to be closed to fishing. Once, this area was covered with dense thickets of the ivory tree coral, Oculina varicosa, which provided excellent habitat for reef fish, such as grouper and wreckfish, and feeding grounds for migratory pelagic (deep-sea) species. However, fishing activities destroyed approximately two-thirds of the bank. A fragile and slow-growing coral, deep-water Oculina only grows about one-half inch per year. These and other damaged coral reefs will take many years, even decades, to recover. To aid in the recovery process, a significant portion of the area was closed to fishing in 1994. NOAA has since funded efforts to assess the banks and to attempt to restore the damaged areas. In July 2000, the National Marine Fisheries Service approved plans to expand the protected area, with the goal of saving the remaining ivory tree coral. Much of the protected area is deeper than 100 m (328 ft), rugged, and can only be studied using advanced undersea technologies. The mission will use the HBOI submersible Clelia and an ROV to study the recovery of the reserve. In addition to habitat characterization work, visual observations of artificial-reef restoration structures deployed on the banks beginning in 1995 will help to determine species' rates of recruitment. Scientists will also test a hydrophone array to determine its utility for monitoring grouper spawning.
Dataset Citation
Dataset Identifiers
ISO 19115-2 Metadata
gov.noaa.nodc:0039428
Full Text · XML
Last Modified: 2021-10-15T16:41:46Z
For questions about the information on this page, please email: ncei.info@noaa.gov