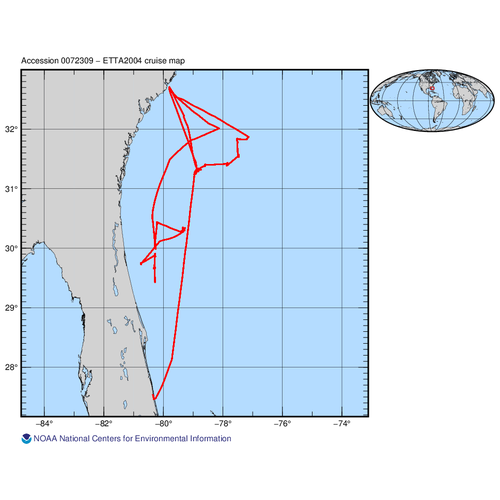 Preview graphic
The diverse ocean-bottom habitats off the coast of South Carolina and Georgia support a corresponding diversity of organisms. An imaginary line, or transect, running from the coast of Georgia to the edge of the continental shelf off South Carolina would cross these habitats: coastal sands washed down from the land; emergent, hard-bottom, rocky outcrops on the continental shelf; the soft muddy sediments on the upper Florida-Hatteras Slope; and the complex bottom topography of the Charleston Bump on the Blake Plateau. Beyond the Blake Plateau lies the deep ocean, or the abyss.

The waters overlying the transect change as well. They become increasingly less influenced by local climate and runoff from the land, and more influenced by tropical currents of the Gulf Stream, as you move offshore.

Scientists on the Estuary to the Abyss Expedition will research the habitats and fauna along this line, which we refer to as the "Latitude 31-30 Transect." Sponsored by the NOAA Office of Exploration, the expedition team will work aboard Harbor Branch Oceanographic Institution's research vessel, the Seward Johnson, which carries and deploys the deep submersible vehicle, the Johnson-Sea-Link II.

For nearly a half-century, fishery scientists and marine ecologists have conducted research and monitoring of many of the near-shore marine and estuarine habitats off the coast of the southeastern U.S. Historically, most of these research efforts have been aimed at waters inshore of the Florida-Hatteras Slope, where productive shelf waters support important fisheries for snappers, groupers, and other reef fishes. The deeper waters beyond the Florida-Hatteras Slope have been studied less.

The Estuary to the Abyss cruise will concentrate on deeper waters (those greater than 400 m) along the transect. Our research will complement previous studies of shallow-water faunas. We will examine changes in faunas that occur with increasing depth and distance offshore.

The exploration along this transect will also help us understand the influence of several variables -- including distance from land (and its human inhabitants), bottom type, and overlying water masses -- on the assemblages of organisms that dwell on the bottom.

Overall, we will expand our knowledge of bottom faunas from the estuary to the deep sea.
Dataset Citation
Dataset Identifiers
ISO 19115-2 Metadata
gov.noaa.nodc:0072309
Full Text · XML
Last Modified: 2020-12-24T17:23:41Z
For questions about the information on this page, please email: ncei.info@noaa.gov