Chemical, navigational and other data collected aboard the USCGC Healy during cruise HLY11TA in the Coastal Waters of Southeast Alaska and British Columbia and North Pacific Ocean from 2011-04-25 to 2011-05-07 (NCEI Accession 0103989) 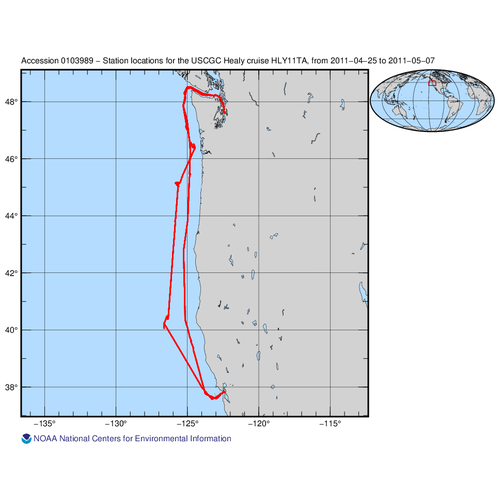 A suite of navigation products produced by the Rolling Deck to Repository program is included in this accession, which include one high resolution, one 1 minute resolution, and one low resolution coordinate file. The CTD data submitted by the originator represent the raw data suite. [Processed versions of the data were generated by NCEI.] R2R provides a processed version of the CTD data. The ADCP data represent the raw data set. Post processed quality assessed data are not available in this accession.
Dataset Citation
Dataset Identifiers
ISO 19115-2 Metadata
gov.noaa.nodc:0103989
Full Text · XML
Last Modified: 2021-01-03T17:46:45Z
For questions about the information on this page, please email: ncei.info@noaa.gov