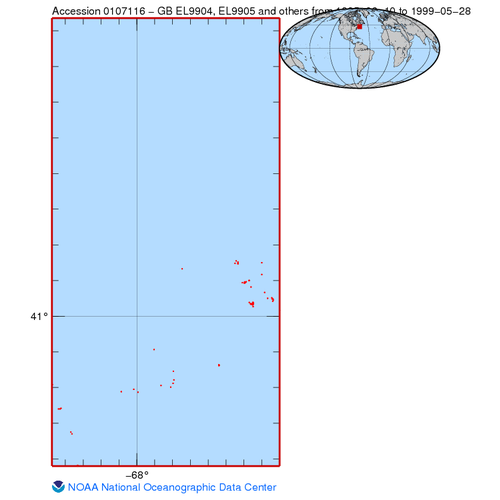 Preview graphic
This accession includes pump cast and biological data collected aboard the EDWIN LINK, OCEANUS and SEWARD JOHNSON during cruises EL9904, EL9905, OC303 and SJ9508 in the North Atlantic Ocean from 1995-06-10 to 1999-05-28. These data include SPECIES IDENTIFICATION - LIFE STAGE, TAXONOMIC CODE, SPECIES IDENTIFICATION - SEX and species abundance. The instruments used to collect these data include pump sampler. These data were collected by Lewis Incze of University of Southern Maine as part of GB. The Biological and Chemical Oceanography Data Management Office (BCO-DMO) submitted these data to NODC on 2013-04-26.

Zooplankton Densities/Abundance
Principal Investigator: Lewis S. Incze (lincze@usm.maine.edu)
Research Technicians: Ford Dye, Beth Novak, Nicholas Wolff
Methods:
Using a pumping system appended to the CTD unit, measured water volumes (typically 40 liters) were sampled at discrete depths and filtered through 40 micron mesh prior to sorting. A subsample of the filtered sample was used for the zooplankton counts and identification. The size of the subsample varied and depended on the amount of zooplankton present - subsamples were larger when there were fewer animals.
From the subsamples, all zooplankton were counted and identified. Counts were then converted into number per cubic meter as follows: Number counted / (Subsample size X Amount filtered).
It is worth noting that the frequency of repeated densities is an artifact of the small subsample volumes screened in order to process a large number of samples. The small sample volumes did not give us the ability to resolve small differences in abundance at individual species and stages (e.g., Cal fin Nauplius I). At this level of sorting many counts were reported as zeros, ones, twos or threes. These counts are at the threshold for detection, and the results give the false impression of many identical densities (concentrations). This also shows up in gaps in the life histories as well. For example, a single depth/station might have NI and NIII and NIV stages, but not II or V. As a result, samples were often recombined to give the population characteristics of an integrated water column, or a group of samples. The approach worked well for our research objectives and we are well aware of its limitations. A single station and depth in our data can be deceiving and does not tell the whole story.
Note: Sampling for cruise EL9904, events EL10999.24 and EL111299.6 are intentional replication sites. All sampling was made at same depth level. These stations were used to test the repeatability of methods.