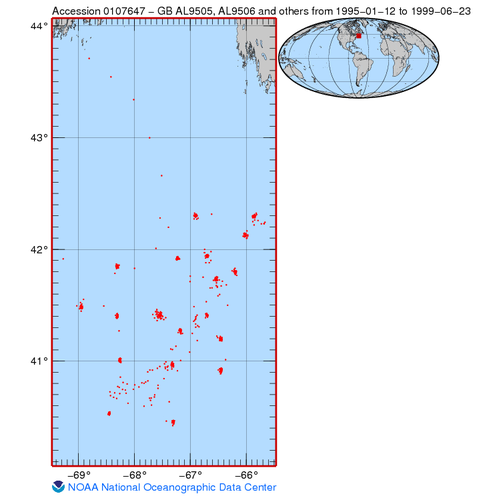 Zooplankton meter2 counts from GSO/URI - Pump data only
The Zooplankton Meter2 Database for the Georges Bank GLOBEC project was originally located in the laboratory of Ted Durbin at the Graduate School of Oceanography, University of Rhode Island. It was accessed via the U.S. GLOBEC Georges Bank data management system using SQLPlus network access to the data base management system at URI. Data were cached and are served from the local computer.
A description of the original URI database is available online and includes the design and variable definitions. A version of this document is shown here (http://globec.whoi.edu/globec-dir/data_doc/zoo_square_meter_URI.html).
Note: Our program's Data Acknowledgment Policy (http://globec.whoi.edu/globec-dir/data-acknowledgement-policy.html) requires that any person making substantial use of a dataset must communicate with the investigators who acquired the data prior to publication and anticipate that the data collectors will be co-authors of published results.
The following documentation applies to the data found locally on the WHOI GLOBEC Data Server.
The data is served as a hierarchy. The least changing variables are in higher order levels (e.g., cruise id, year, month, etc.), while variables that change the most are in the lower order levels (e.g., time of collection, net number, taxon collected, etc.) There are six levels within the data; variable names and descriptions are given in the metadata.
Most column variable names and instrument names were taken from the U.S. GLOBEC Georges Bank data thesaurus; those that were not follow the GLOBEC data protocols. The taxonomic code variable (taxon_code) is from the National Oceanographic Data Center's Taxonomic List, version 8. Taxonomic information is built into these ten-digit codes as they reflect the systematic nomenclature.
You may contact BCO-DMO for additional help.
Dataset Citation
Dataset Identifiers
ISO 19115-2 Metadata
gov.noaa.nodc:0107647
Full Text · XML
Last Modified: 2022-10-16T15:17:27Z
For questions about the information on this page, please email: ncei.info@noaa.gov