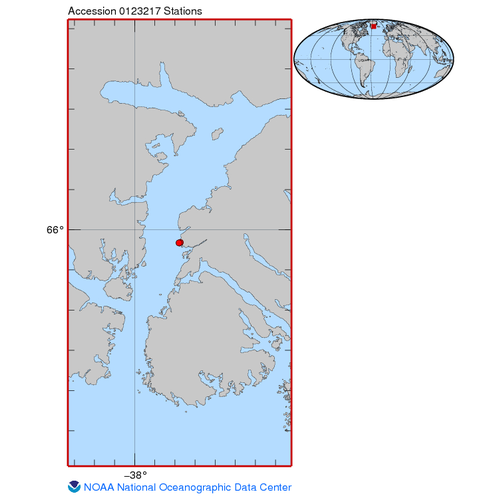 Preview graphic
The data included in this dataset were collected in the Sermilik Fjord, located in East Greenland in the Ammassalik district close to the town of Tasiilaq. Data collection was conducted during the summer of 2008 in separate legs. During the first leg, which took place during July 2008, two moorings were deployed; one at a depth of 185 meters and one at a depth of 25 meters. The deeper mooring was equipped with one RBR DR-1050 depth recorder, 10 Onset UBTI-001 Temperature Loggers, and one SBE-37(P) Microcat. The shallow mooring was equipped with one RBR DR-1050 depth recorder and one SBE-37(P) Microcat. These moorings were deployed on July 6, 2008 and were recovered on September 1, 2008. The second leg of the data collection, which took place in September 2008, also deployed two moorings at the same locations as the July moorings. Each of these moorings was equipped with one SBE-37 (P) Microcat. These two moorings were deployed on Sept 3, 2008. The shallow mooring was recovered on August 20, 2009 and the deep mooring was recovered on November 16, 2011.
The purpose of this data collection was part of an exploratory project whose long term goals were to: 1) quantify the (liquid) fresh water flux out of Sermilik Fjord, and 2) determine what water masses flow into the fjord. In particular, if the warm, Atlantic water (Irminger Water) which is found off the slope, is able to penetrate into the fjord.
Dataset Citation
Dataset Identifiers
ISO 19115-2 Metadata
gov.noaa.nodc:0123217
Full Text · XML
Last Modified: 2022-07-18T12:19:16Z
For questions about the information on this page, please email: ncei.info@noaa.gov