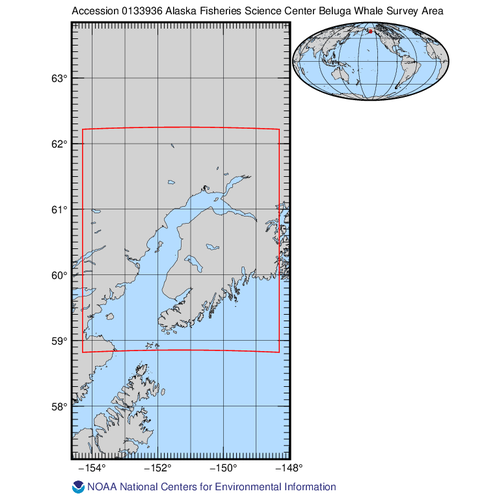 Preview graphic
The National Marine Fisheries Service (NMFS) has conducted aerial counts of Cook Inlet beluga whales (Delphinapterus leucas) from 1993 to 2014 (excluding 2013). Nearly all counts were conducted during the month of June. The routine nature of these counts and the consistency in research protocol lend themselves to inter-annual trend analyses. Beginning in 2005, an aerial survey was added during the month of August to document calving groups within the upper Inlet (north of East and West Foreland). Research protocol has been based on paired observers on the shoreward side of the aircraft and a single observer and computer operator on the offshore side independently searching for marine mammals. Data on environmental conditions, time, location, species, and inclinometer angle were collected for each sighting. The counting protocol included multiple passes near each beluga group while simultaneously collecting video footage. The counting system and observer performance has been tested through paired, independent observational effort. Aerial observer counts are used to calculate median counts for each beluga group to provide a daily index for the population prior to calculating the abundance estimate. Video has been used to count the number of animals in the group to correct for missed animals in the observer counts (perception bias). One video camera had a lens set at a wide angle to view the entire beluga group while the second video camera was zoomed to approximately 10x to magnify a subsample of individual whales in the group. The zoomed video has been used to examine color ratios of white adults relative to smaller and darker juveniles and calves and correct for those individuals missed due to their size or coloration. Aerial counts and video footage of beluga whales provide the fundamental data used to calculate the abundance of and a calving index for the Cook Inlet population. The abundance estimates are applied to trends analyses to determine the status of the stock. Three datasets are included here that contain basic survey data such as latitude, longitude and sightings, as well as the counts of beluga whale groups made by the aerial observers and the results from video analysis from data collected on surveys from 1993-2012, and 2014.
Dataset Citation
Dataset Identifiers
ISO 19115-2 Metadata
gov.noaa.nodc:0133936
Full Text · XML
Last Modified: 2022-07-01T18:16:12Z
For questions about the information on this page, please email: ncei.info@noaa.gov