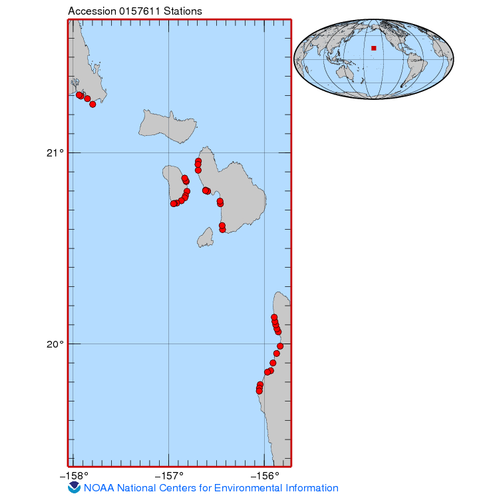 Data provided in this dataset include benthic images that were collected during the towed-diver surveys from a camera that was mounted to the towboard. A downward-facing DSLR camera with strobes collected these photographic quadrat data by capturing an image of the benthos at 15-second intervals during the surveys.

Two additional datasets were collected during the surveys and are documented separately. Towed divers recorded visual estimates of percentage of live coral that was pale and bleached, as well as presence/absence data of condition by generic composition. Oceanographic data was collected continuously throughout each survey with a suite of sensors mounted to the towboard recording conductivity, temperature, depth, flourometry (chlorophyll-a), turbidity and dissolved oxygen.
Dataset Citation
Dataset Identifiers
ISO 19115-2 Metadata
gov.noaa.nodc:0157611
Full Text · XML
Last Modified: 2020-08-24T15:18:35Z
For questions about the information on this page, please email: ncei.info@noaa.gov