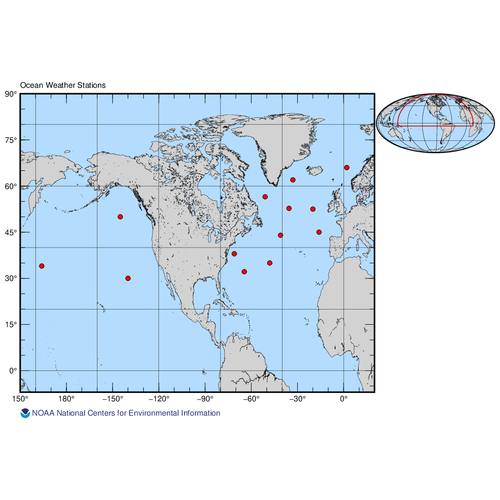 Under the 1949 revised North Atlantic Ocean Stations (NAOS) Agreement of the International Civil Aviation Organization (ICAO), ten weather stations served by 25 vessels would be maintained in the North Atlantic. of the ten stations, six stations were allocated to the United States, some of which would be operated jointly. In the North Pacific Ocean prior to the outbreak of the Korean Conflict, U.S. Coast Guard cutters were stationed at two Ocean Stations. After the start of the conflict, the service added three more stations in the North Pacific.

The Oceanographic Station Data format contains physical-chemical oceanographic data recorded at discrete depth levels. Most of the observations were made using multi-bottle Nansen casts or other types of water samplers. A small amount (about 5 percent) were obtained using electronic CTD (conductivity-temperature-depth) or STD (salinity- temperature-depth) recorders. The CTD/STD data were reported to NODC at depth levels equivalent to Nansen cast data, however, and have been processed and stored the same as the Nansen data. Cruise information (e.g., ship, country, institution), position, date, and time, and reported for each station. The principal measured parameters and temperature and salinity , but dissolved oxygen, phosphate, total phosphorus, silicate, nitrate, nitrite, and pH may be reported. Meteorological conditions at the time of the cast (e.g., air temperature and pressure, wind, waves) may also be reported, as well as auxiliary data such as water color (Forel-Ule scale), water transparency (Secchi disk depth), and depth to bottom. Values of density (sigma-t) sound velocity, and dynamic depth anomaly are computed from measured parameters. Each station contains the measurements taken at the observed depth levels, but also includes data values interpolated to a set of standard depth levels.

The UBT file format is used for temperature-depth profile data obtained using expendable bathythermograph (XBT) instrument. Standard XBTs can obtain profiles at depths of about 450 or 760 m. With special instruments, measurements can be obtained to 1830 m. Cruise information, position, date, and time are reported for each observation. The data record comprises pairs of temperature-depth values. Unlike the MBT data file, in which temperature values are recorded at uniform 5m intervals, the XBT Data File contains temperature values at non-uniform depths. These depths are at a minimum number of points ("inflection points") required to record the temperature curve to an acceptable degree of accuracy. On output, however, the user may request temperature values either at inflection points or interpolated to uniform depth increments.