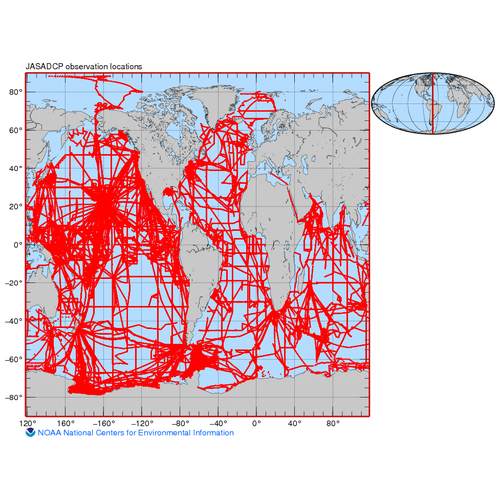 Preview graphic
This collection contains cruises beginning in 1985 and continuing up to the present, which were received, reviewed, and prepared for archival at the Joint Archive (JA) for Shipboard Acoustic Doppler Current Profilers (SADCP). Only data sets that have passed the quality control and calibration stages, thus science-ready, are included in the JASADCP. The JASADCP is a collaboration of NOAA and the University of Hawaii Currents Group. The data have been contributed by both US and international organizations.

Absolute U- and V-component ocean current vectors from SADCP, as both a high frequency sampling (nominally 5 minutes with 8 m depth bins) and an averaged subset (hourly time and 10 m depth means), are provided for the global oceans. The depth range was typically from 20 to 300 m prior to the late 1990s when penetration extended to over 1 km. Since the 2000's, most ships have been equiped with multiple ADCP sensors, each which is capable in simultaneously recording in different modes. This allows multiple profiles with variations in resolution and depth range, and in turn, gives new ways to analyze the data. Thus, each cruise can have several sonar-cruise sets, for each which the JASADCP assigns a unique SACID.

The high frequency samples along with ancillary parameters of each sonar-cruise set are provided in the Common Oceanographic Data Access System (CODAS) binary format, from which long- and short-form NetCDF files are made. The long form is an exact dump of the CODAS binary database and holds the velocity of the water relative to the ship, velocity of the ship, and all available ancillary parameters. The short form gives currents in Earth coordinates with received signal strength and select ancillary parameters. The standard (averaged hourly/10m depth bins) subset is stored in ASCII and NetCDF.
Dataset Citation
Dataset Identifiers
ISO 19115-2 Metadata
gov.noaa.nodc:NCEI-UH-JASADCP
Full Text · XML
Last Modified: 2020-12-15T03:47:37Z
For questions about the information on this page, please email: ncei.info@noaa.gov