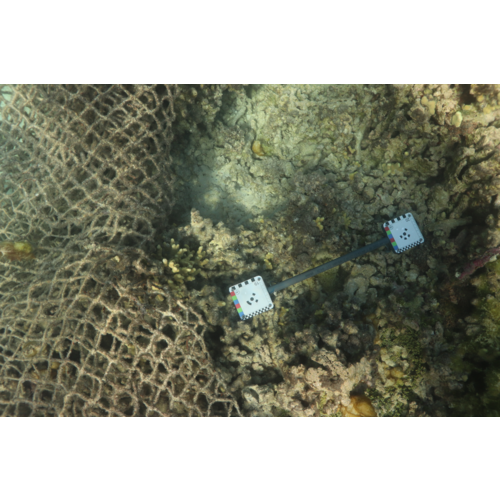 Preview graphic
The photographs described in this dataset were collected using a Structure from Motion (SfM) approach during in-water marine debris swim surveys conducted by snorkelers in search of derelict fishing nets. Surveys were conducted by the NOAA Fisheries, Ecosystem Sciences Division (ESD) from September 24 to October 3, 2018 at Pearl and Hermes Atoll during an ESD-led marine debris mission to the Northwestern Hawaiian Islands (NWHI) aboard the NOAA Ship Oscar Elton Sette. The lagoon at Pearl and Hermes was surveyed equally across the spatial gradient, from locations where derelict fishing nets are common to locations where derelict fishing nets have never been observed. During the 2018 mission, only a subset of marine debris surveys resulted in a SfM survey. Fishing nets were located during swim surveys and selected for SfM if the net was interacting with coral or hard substrate, the depth of the net was within ~1–4 m of the surface, and the area of the net fit within the 9 sq. meter SFM survey plot.

A complete SfM survey is comprised of three sets of images. Two sets were taken at each net-impact site, one series “before” and one series “after” the fishing net was removed from the reef. A final set was taken at a paired “control” site that was selected ≥50 m away from the net-impact site. During a SFM survey, a permanent 3 x 3 m plot was established around the center of the fishing net, and the survey plot was photographed using a back and forth swim pattern (“before” photos) for later processing using a SfM approach. The fishing net was then removed and the same area was photographed again in the same way (“after” photos). The paired control site was also photographed using the same method (“control” photos).
Dataset Citation
Dataset Identifiers
ISO 19115-2 Metadata
gov.noaa.nodc:PIFSC-SfM-Images-HI
Full Text · XML
Last Modified: 2020-12-14T16:24:54Z
For questions about the information on this page, please email: ncei.info@noaa.gov