Data were provided by the Global Snow Laboratory, Rutgers University. Period of record is 1967-2012 (45 years, no data availble for October 1969).

According to the National Snow and Ice Data Center (NSIDC), the Northern Hemisphere sea ice extent — which is measured from passive microwave instruments onboard NOAA satellites — averaged for October 2012 was 7.00 million square km (2.70 million square miles). The monthly extent was 24.61 percent below average and ranked as the second smallest October Northern Hemisphere sea ice extent in the satellite record. The October 2012 Arctic sea ice extent was 230,000 square km (88,800 square miles) larger than the smallest October extent on record that occurred in 2007. Arctic sea ice rapidly expanded during October, after reaching an annual minimum in September, doubling in size between October 1st and 31st. October average Arctic sea ice has declined at a rate of 7.1 percent per decade. 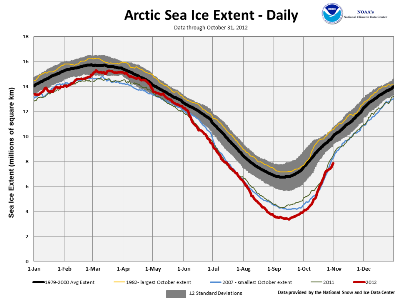 According to analysis from the NSIDC, sea ice rapidly expanded into the East Siberian, Chukchi, and Laptev seas which were nearly completely frozen by the end of October. Conversely, the Kara, southern Beaufort, and Barents seas were much slower to freeze. The fast pace freezing of some regions of the Arctic was not enough to compensate for the slow freezing in other regions and make up the large ice extent deficits experienced during the late summer of 2012. At the end of October, Arctic sea ice extent continued to be much below average and near record-low levels.