According to the National Snow and Ice Data Center (NSIDC), the Northern Hemisphere (Arctic) sea ice extent — which is measured from passive microwave instruments onboard NOAA satellites — averaged for September 2014 was 5.28 million square km (2.04 million square miles), 1.24 million square km (480,000 square miles), or 19.02 percent, below the 1981-2010 average. This was the sixth smallest September Arctic sea ice extent in the satellite record. According to the NSIDC, sea ice extent was below average in nearly all regions of the Arctic, with the exception of the Barents Sea and part of the seas around the Canadian Archipelago, where the Northwest Passage continued to be choked off. The Northwest Passage has been ice free only four times in recent history — 2007, 2008, 2010, and 2011. In the Laptev Sea, Arctic sea ice extent was much below average, with the ice edge reaching within 5 degrees latitude of the North Pole. The Northern Sea Route was ice free during all of September. Overall, September Arctic sea ice extent is decreasing at an average rate of 12.88 percent per decade. 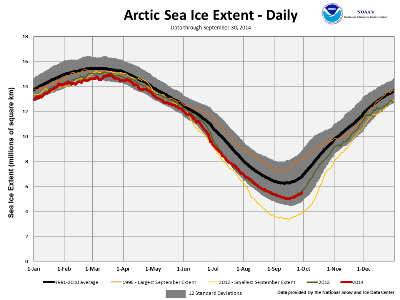 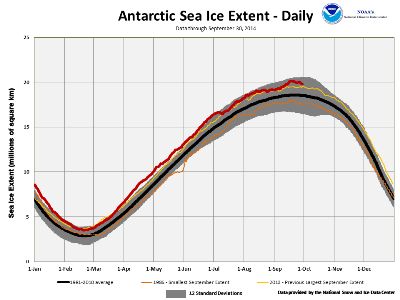 NOAA National Centers for Environmental Information, State of the Climate: Monthly Global Snow and Ice Report for September 2014, published online October 2014, retrieved on May 28, 2022 from https://www.ncei.noaa.gov/access/monitoring/monthly-report/global-snow/201409.