The Northern Hemisphere snow cover extent (SCE) during March was 40.07 million square km (15.47 million square miles), 60,000 square km (20,000 square miles) below the 1981-2010 average. This was the 24th smallest (28th largest) Northern Hemisphere SCE in the 51-year period of record and largest since 2013. The North American SCE was below average while the Eurasian SCE was near average.

During March, the North American SCE was 130,000 square km (50,000 square miles) below the 1981-2010 average — the 20th smallest on record. A coastal storm in eastern North America and an active storm pattern across the American Northwest and Canadian Southwest, in addition to lingering snow from earlier in the season, helped to increase the continental snow cover. Below-average snow cover was observed across the Great Plains in the United States, stretching into the Canadian Prairies. The contiguous U.S. SCE was the 19th smallest on record; the Canadian SCE was the 23rd smallest on record, while the Alaska SCE was the eighth largest.

The Eurasian March SCE was 24.56 million square km (9.48 million square miles), 70,000 square km (20,000 square miles) above average. This ranked as the 25th smallest (27th largest) March SCE for Eurasia. Above-average snow cover was observed across central and western China and much of Mongolia and Kazakhstan. Below-average snow cover was observed across most of Europe, Turkey, and Iran.

According to the National Snow and Ice Data Center (NSIDC), the Northern Hemisphere (Arctic) sea ice extent – which is measured from passive microwave instruments onboard NOAA satellites – averaged for March 2017 was 14.43 million square km (5.57 million square miles), 1.17 million square km (450,000 square miles), or 7.50 percent, below the 1981-2010 average. This was the smallest March Arctic sea ice extent on record, dipping below the previous record of 14.49 million square km (5.59 million square miles) set in 2015. This is the sixth consecutive month with record-low sea ice extent in the Arctic. The rate of sea ice contraction was even during March. Sea ice expanded in early March until the annual maximum extent occurred on the 7th, with the ice extent contracting for a few days with additional expansion occurring in mid-month, before another period of sea ice contraction. Sea ice expanded once again during the last few days of March. At the end of March, below-average sea ice was observed in the Barents Sea and Sea of Okhotsk with slightly above-average ice extent in parts of the Bering Sea. March Arctic ice extent is decreasing at an average rate of 2.7 percent per decade. 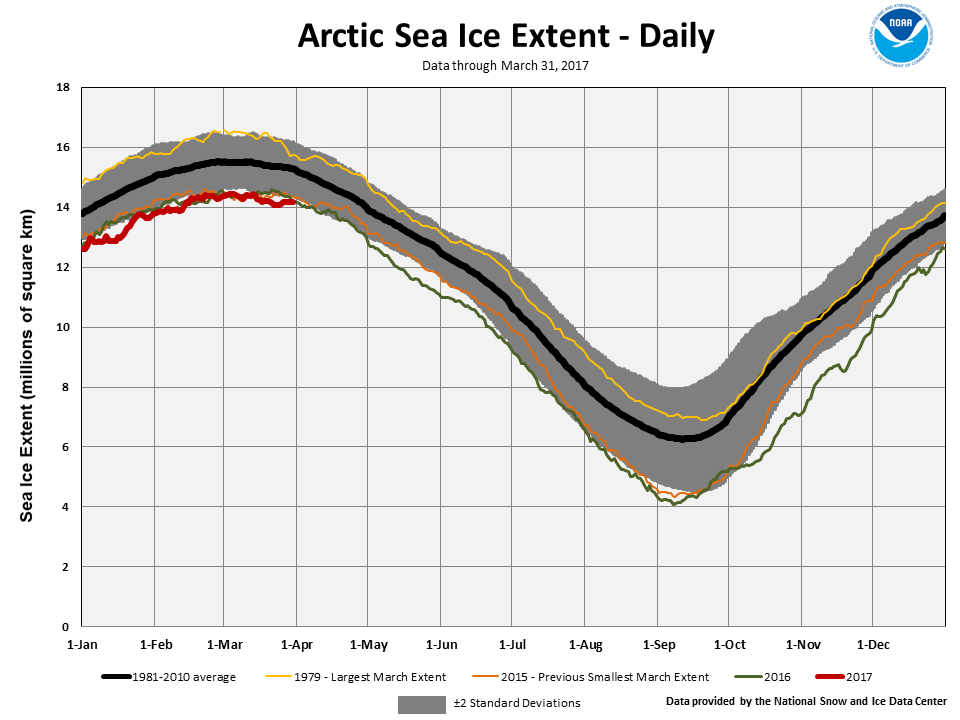