In the atmosphere, 500-millibar height pressure anomalies correlate well with temperatures at the Earth's surface. The average position of the upper-level ridges of high pressure and troughs of low pressure—depicted by positive and negative 500-millibar height anomalies on the October 2019 map—is generally reflected by areas of positive and negative temperature anomalies at the surface, respectively. 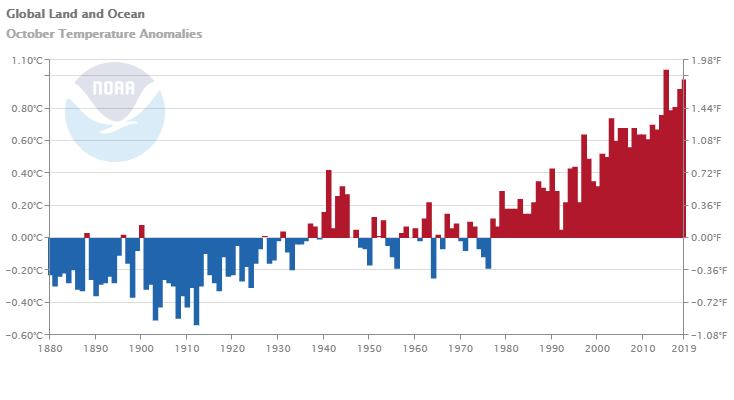 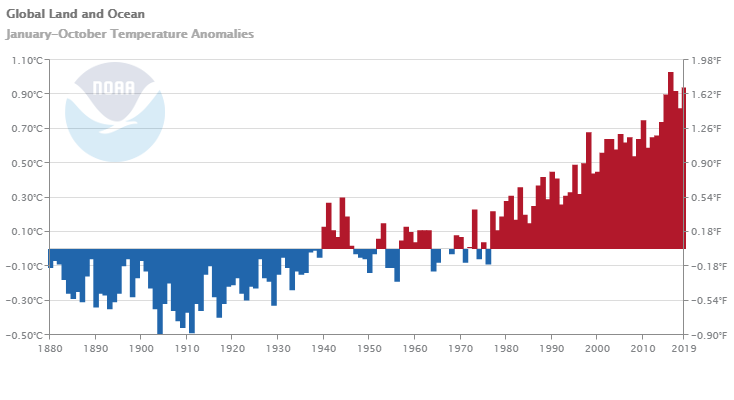 The Northern Hemisphere and the Southern Hemisphere land and ocean surface temperatures were both the second warmest January–October on record at +1.14°C (+2.05°F) and +0.75°C (+1.35°F), respectively.

Regionally, South America, Europe, Africa, Asia, Oceania and the Hawaiian region had a January–October temperature average that ranked among the three highest such periods on record. The maps shown above represent precipitation percent of normal (left, using a base period of 1961–1990) and precipitation percentiles (right, using the period of record) based on the GHCN dataset of land surface stations. As is typical, precipitation anomalies during October 2019 varied significantly around the world. October precipitation was generally drier than normal across much of Australia, the western half of the contiguous U.S., eastern and southern South America, eastern and southern Europe, as well as parts of central and southern Asia. Wetter-than-normal conditions were notable across the eastern half of the contiguous U.S., western Africa, northern Europe, southern India, Japan, and across parts of central Asia.