During the first week of November, heavy rainfall associated with a tropical low pressure system, which would eventually become Cyclone Jal, created chaos across southern Thailand and northern Malaysia. Hat Yai, a major commercial center in southern Thailand, had over 10 feet (3 meters) of water on roadways, submerging cars. In the Malaysian states of Perlis and Kedah, over 28,000 people were displaced and an airport in northern Malaysia was forced to close due to a flooded runway. Local media said one person had been killed and another was missing in Kedah.

Heavy rainfall in Costa Rica over a 24-hour period led to flooding and landslides on November 3rd that killed at least 25 people and left 15 others missing. President Laura Chinchilla declared a national emergency in response to the widespread damage, claiming the disaster was one of the worst the nation had ever confronted. Over 2,500 people in the capital and along the coast were forced to evacuate due to the flooding, mudslides, and fear of a dam breaking. National Emergency Commission President Vanessa Rosales said the rains may have damaged several major coffee areas in Costa Rica's highlands, but the amount of monetary losses were difficult to estimate.

The northeastern Philippines endured a week of pounding rain between the 1st and 7th of November. The region was still struggling to recover from Super Typhoon Megi, which caused devastation weeks earlier. About 200 families in Kalinga province were forced to evacuate due to fears of a natural dam collapsing and releasing a torrent on downstream villages. Villages were flooded in six provinces, with 13 people reported dead and another two missing. More than 417,000 people were affected by the floods in all, with 12,000 forced to evacuate.

On November 14th, a storm brought flooding to northern France and Belgium, leaving three people dead. Officials described the flooding as the worst in 50 years. The national weather service said that in two days Belgium received as much rainfall as it normally gets in a month. In Granville, France, 1.9 inches (48.4 mm) of rain fell in 24 hours. Storms that affected the region just a week earlier killed one and left another missing in northern France. 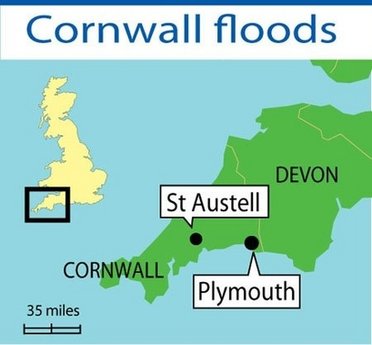 On November 17th, heavy rainfall in the southwest England county of Cornwall caused severe flooding and landslides. Local media reported that the towns of St. Austell and St. Blazey were impassable and people were trapped in cars and houses. Emergency officials evacuated 100 homes, and schools were forced to close. In all, 230 homes and 400 businesses were directly impacted by the flooding and landslides. The U.K. government promised 2.1 billion pounds of government funding to help build flood defense infrastructure over the next four years. Although damage was widespread, no fatalities or injuries were reported.

Heavy rainfall continued in central Vietnam in the midst of its rainy season. In the latest round, an estimated 11.8–19.7 inches (300–500 mm) of rain fell from November 14th–19th, leaving at least 22 people dead and seven others missing. The National Committee for Flood and Storm Control reported that more than 40,000 homes were damaged or submerged and 97 miles (156 km) of roads were destroyed.

Stretching beyond the usual end to its wet season, torrential rainfall led to flooding and landslides in Venezuela that killed at least 30 people and forced more than 5,000 to evacuate their homes. The typical rainy season occurs from May–October and the dry season occurs from November–May. As reported by Xinhua, the country was experiencing its worst weather in 40 years. 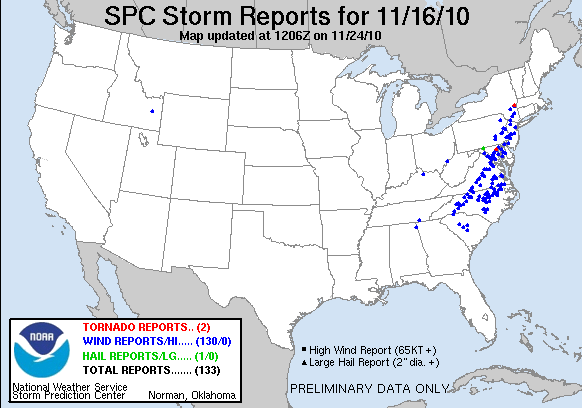 A storm system moving across the Mid-Atlantic overnight on November 16th and 17th brought a rare, late–season bout of severe weather from the Carolinas into New Jersey. There were 130 severe wind reports with the storm system, and trees and power lines were downed in many locations. Straight line winds were blamed caused airplanes to flip at a Trenton, New Jersey airport. The event in the Mid-Atlantic was extremely rare; there have been no previous instances of severe thunderstorms in New Jersey or New York between midnight and dawn during November, and since 1950 only 14 November days have brought severe thunderstorms to New Jersey. An EF-1 tornado touched down briefly near Baltimore, Maryland where structural damage to homes and businesses occurred, but no fatalities were reported. An EF-1 tornado was also confirmed in Columbia County, New York. Tornadoes in the region are also extremely rare during November. Nearly 18,000 people in the region experienced power loss during the event.

Another rare, late– severe weather event occurred in the Midwestern U.S. on November 22nd, when there were eight preliminary tornado reports across northern Illinois and southern Wisconsin. A confirmed EF-2 tornado in Caledonia, Illinois caused severe damage and rolled a school bus filled with children. Fortunately, only minor injuries were reported. This is the first November tornado in Illinois in five years. Two tornadoes were confirmed in Wisconsin; the last November tornado in Wisconsin occurred in 1971. Only one time before, in 1960, has a storm system brought two tornadoes to Wisconsin during November. 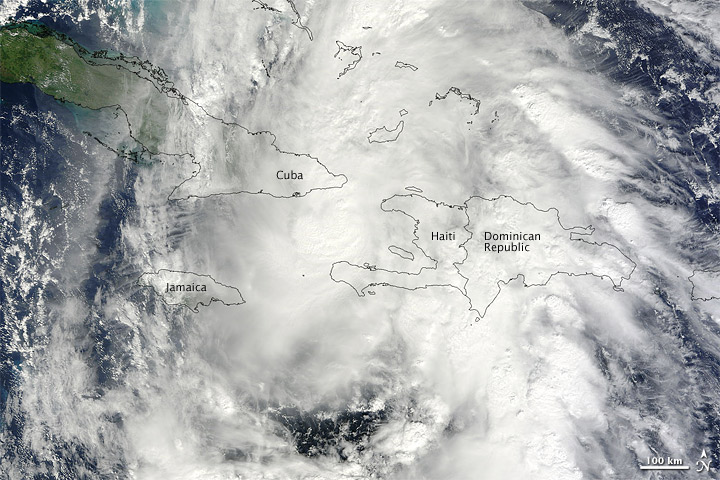 Hurricane Tomas formed in the Caribbean Sea near the end of October. After causing significant destruction to the islands of Saint Lucia, Saint Vincent, and the Grenadines, the storm weakened as it tracked northwestward toward Haiti. Tomas struck the southwestern portion of Haiti on November 5th with 85 mph (140 km/hr) winds—Category 1 strength on the Saffir Simpson hurricane wind scale. At least 20 people were killed and 30,000 were displaced as the storm triggered flooding and mudslides. The rains associated with the storm also exacerbated conditions in Haiti, where international aid agencies have been fighting a cholera epidemic. 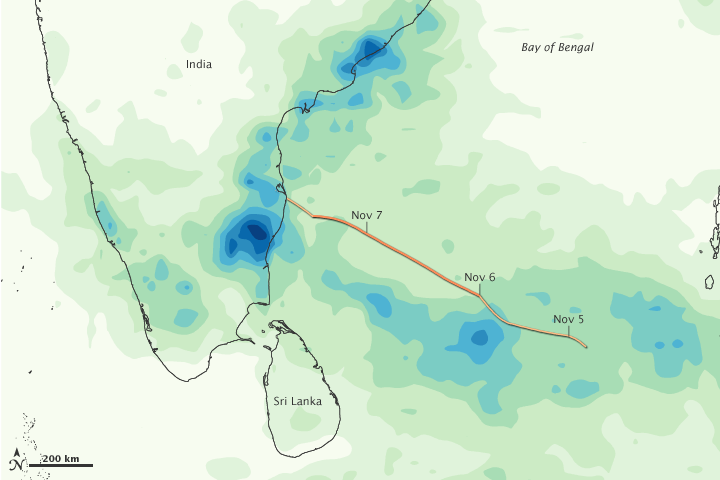 Cyclone Jal brought record breaking rainfall to India and Sri Lanka on November 7th through 11th. At the storm’s peak, Jal had winds of 80 mph (130 km/hr), but Jal made landfall in India as a tropical storm. Satellite estimates report over 24 inches (600 mm) of rainfall across southern India. The region was already reeling from heavy rainfall the first two days of November, which left 22 people dead. Roads and bridges along the coastal districts were washed away. Extensive damage to crops was also sustained along the Bay of Bengal coast. The Press Trust of India attributed 11 deaths in Andra Pradesh to the rainfall from Jal. Sri Lanka was particularly hard hit from impacts of the storm. Overnight rains dumped 17.5 inches (445 mm) of rain on the capital city of Colombo, the most rainfall for a single day since June 1992. According to government officials, up to 300,000 people were forced from their homes across four districts — Colombo, Kalutara, Gampaha, and Matara. At least one man was killed in Sri Lanka after being struck by lightning. 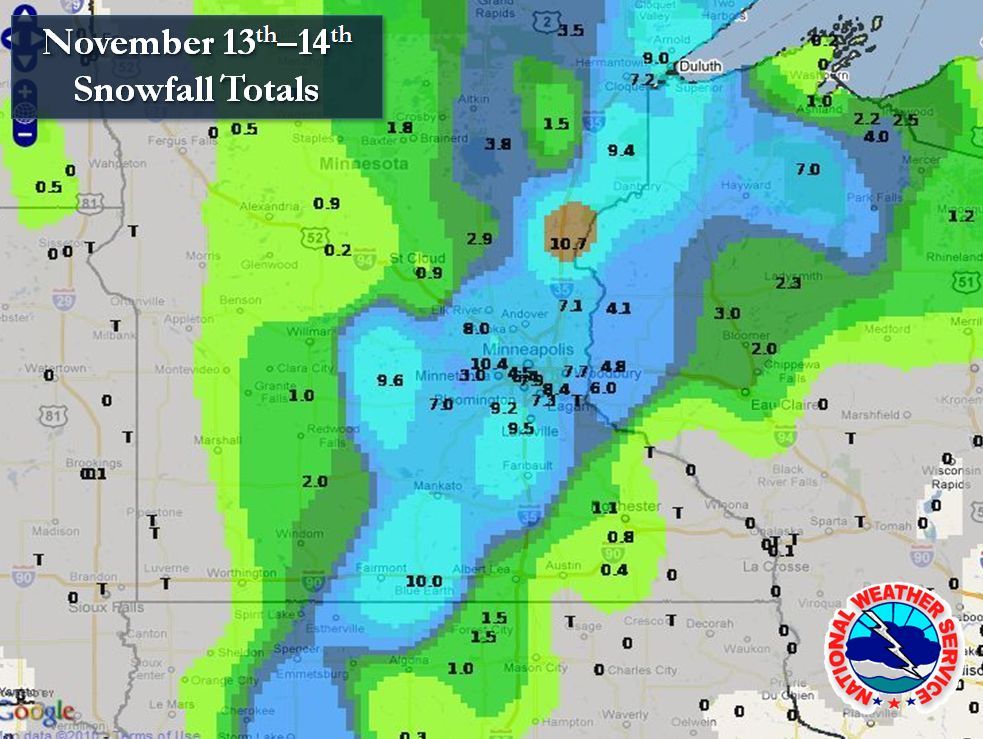 A rare early season winter storm across the U.S. states of Iowa, Minnesota, and Wisconsin brought 8 to 12 inches (20 cm to 30 cm) of snow on November 13th, just three days after the region experienced record breaking warm temperatures. The storm contributed to Duluth, Minnesota having its sixth snowiest autumn on record. A low pressure system in the Central Plains strengthened as it moved through the region. The storm is one of the most significant snowstorms to impact the city of Minneapolis before Thanksgiving in two decades. Nearly 115,000 people were reported to have lost power during the storm, and over 200 car accidents were reported. Two deaths from a car accident in Wisconsin were blamed on the snow storm. 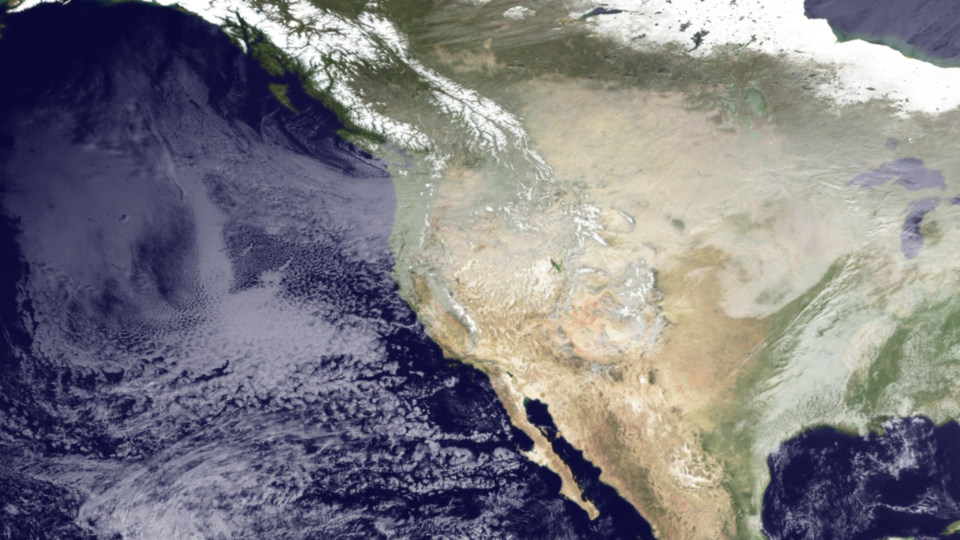 A major winter storm impacted large portions of the Pacific Northwest U.S. on November 22nd–23rd. A record 2.5 inches (6.4 cm) of snow fell at Seattle–Tacoma International Airport on the 22nd, breaking the previous record of 1.5 inches (3.8 cm) set in 1977. At least three people were killed in Washington state in weather-related accidents. Two days later, on the 24th, dozens of daily low temperature records were broken across Washington, northern Idaho, and western Montana. In Missoula, Montana, a low temperature record of -11°F (-24°C) was set, breaking the previous record of -8°F (-22°:C) set in 1931, and at Omak, Washington, a low temperature of -6°F (-21°C) shattered the old record of 2° (-17°C) set in 1993. The storm system barreled eastward, bringing high winds and snow to Utah and a mixed bag of snow, sleet, and freezing rain to the Dakotas. Highways were shut down for a period of time in Idaho, Wyoming, and Utah. Freezing rain fell in Iowa, leading to three deaths in icy weather-related accidents.

Widespread snow and ice, along with record-cold temperatures, gripped parts of the United Kingdom during the last week of November. More than 16 inches (41 cm) of snow fell in parts of northeastern England and Scotland on the 27th as many November low temperature records were broken. In Llysdiman, Wales, the temperature plummeted to its lowest ever November temperature of 0.4°F (-18.0°C) and in Northern Ireland, Loch Fea recorded its all time lowest November temperature of 14.9°F (-9.5°C). According to the BBC, the United Kingdom experienced its earliest widespread snowfall since 1993. The wintry weather continued in Western Europe as heavy snow fell in northern Spain and Portugal on November 29th–30th. No fatalities were reported. According to Meteosuisse, Switzerland experienced its coldest night in 45 years as temperatures plunged to -22°F (-30°C). In Germany, a combination of snowy conditions and freezing temperatures led to 200 flight cancellations at Frankfurt airport, Europe's third busiest.

An unusual winter storm impacted large portions of Alaska on November 22nd–24th. Record-setting precipitation and record high temperatures created a winter ice storm that affected much of interior, northern, and south central parts of the state. According to the Fairbanks National Weather Service Office, rain fell on "deeply frozen" snow-packed roadways, leading to ice that covered nearly all of Alaska's road system and created dangerous driving conditions. On November 22nd, a record 0.50 inch (13 mm) of rainfall was recorded at Fairbanks International Airport, breaking the old daily record of 0.21 inch (5 mm) set in 1925. This rainfall amount was the second largest daily rainfall amount between November and March in Fairbanks since record keeping began in 1904. The heaviest amount was 0.99 inch (25 mm), which fell on January 20th, 1937. In the southern portion of the state, King Salmon reached a new daily high record temperature of 51°F (11°C) on November 23rd, breaking the old record of 48°F (9°C) set in 1952. Anchorage reported only its third freezing rain event in the past three decades, the other two occurring in 1995 and 1980. Dozens of traffic accidents occurred across the state, but no fatalities were reported.

Record warm temperatures across western Russia during November affected animals in the region. Temperatures in Moscow reached 54°F (12.3°C) on November 15th—20°F (11.2°C) above average. Russian meteorologists report that during the first half of November, temperatures in western parts of country hovered around 18°F (10°C) above normal and temperatures in Moscow have broken daily records on five separate days. Temperatures in western Siberia have also been extremely warm, with the temperature in Novosibirsk reaching 39°F (3.7°C), marking the warmest November temperature ever recorded there. The warm temperatures have caused problems for wildlife, according to ecologists. Hedgehogs and badgers have been unable to go into hibernation, while some species of red squirrel and hares have not transitioned into their warm winter coats. This will negatively impact the animals when temperatures return to normal.