The month of December was cooler and wetter than normal for a large portion of the U.S. - see the national temperature and precipitation state of the climate report. These environmental conditions were associated with thousands of daily snowfall records being broken across the United States. At the beginning of December, snow cover in the U.S. was confined to the high terrain of the West, the northern Great Lakes, northern New England, and parts of the Appalachians. On December 1st, 11.2 percent of the contiguous U.S. had snow cover according to the National Operational Hydrologic Remote Sensing Center. Three major winter storms dumped snowfall measured in feet from the Rockies, across the Great Plains, and into the Mid-Atlantic and Northeast. An anomalous storm also brought the earliest snow accumulations on record along the Gulf Coast. By the end of the month, 60.3 percent of the contiguous U.S. was under snow cover. According to Rutgers University Global Snow Lab, the U.S. experienced its snowiest December since satellite records began in 1966. The average snow extent for the contiguous U.S. was over 4.1 million square km (1.6 million square miles) - the largest for any December since the satellite record began in 1966. The snow cover for all of North America was also at its largest extent for any December at 18.1 million square km (7.0 million square miles). Several major cities, including Philadelphia, Washington D.C., and Oklahoma City, had their snowiest Decembers on record. 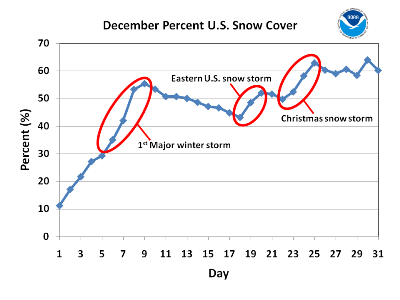 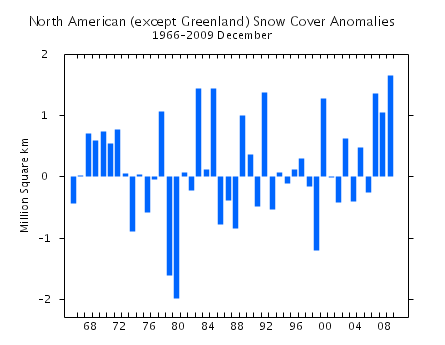 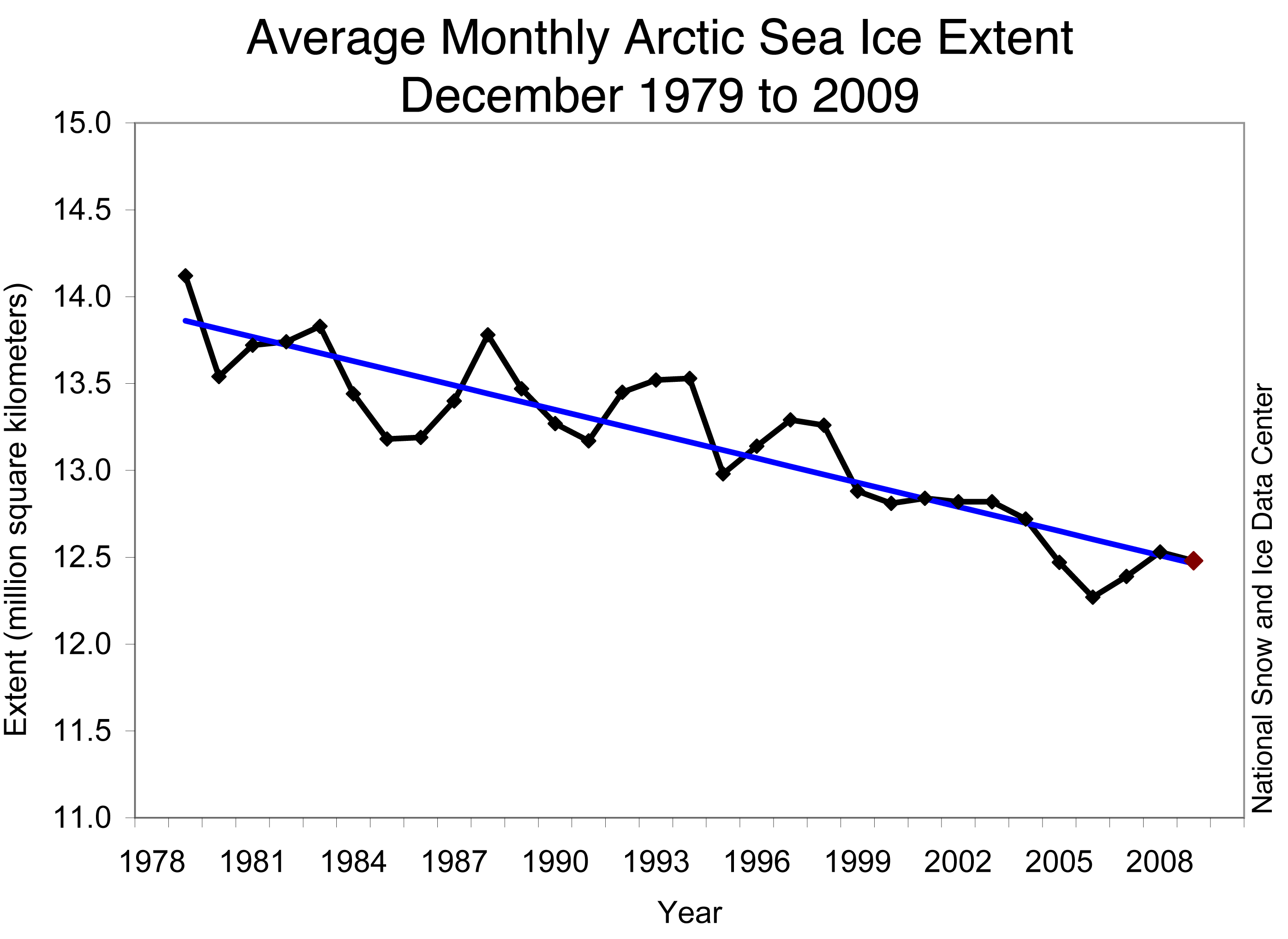 Arctic sea ice extent was below normal for December, primarily in the region adjacent to the North Atlantic Ocean. Arctic sea ice extent averaged for the month was 12.48 million square km (4.82 million square miles), marking the fourth lowest December extent. This was 920,000 square kilometers (350,000 square miles) below the 1979 to 2000 average for December, but 210,000 square kilometers (81,000 square miles) above the record low for the month, which occurred in December 2006. The low ice extent is partly due to a warm December across the Arctic, with temperature anomalies greater than 7 °C (13 °F) on its Atlantic side. According to the National Snow and Ice Data Center and NOAA’s Climate Prediction Center, the month experienced the strongest negative phase of the Arctic Oscillation (AO) since 1950. A negative phase AO is often associated with a warm Arctic region and cooler conditions in the mid-latitudes of the Northern Hemisphere. 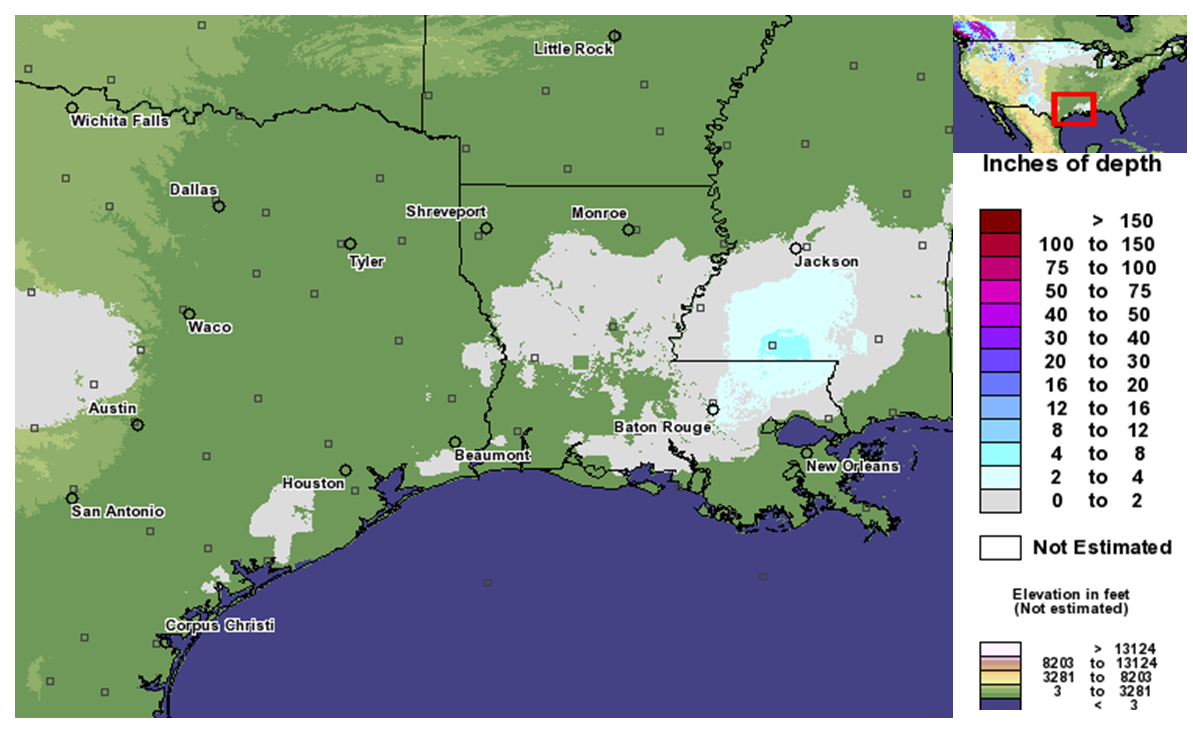 Several locations along the U.S. Gulf Coast received their earliest accumulating snowfall on December 4th when a strong storm developed over the Gulf of Mexico, while cool arctic air was moving in behind an upper level trough. Houston, Texas received 1.0 inch (2.5 cm), Lake Charles, Louisiana observed 0.2 inches (0.5 cm), and Lafayette, Louisiana measured 0.3 inches (0.8 cm), all marking the earliest measureable snowfall for each station. Towns in southwest Mississippi received as much as 5 inches (12.7 cm) of snow, while the heaviest accumulation in Texas was 4.0 inches (10.2) and 3.0 inches (7.6 cm) in Louisiana. The previous earliest snowfall records for this region occurred on December 11th, 2008 when a similar weather situation occurred. 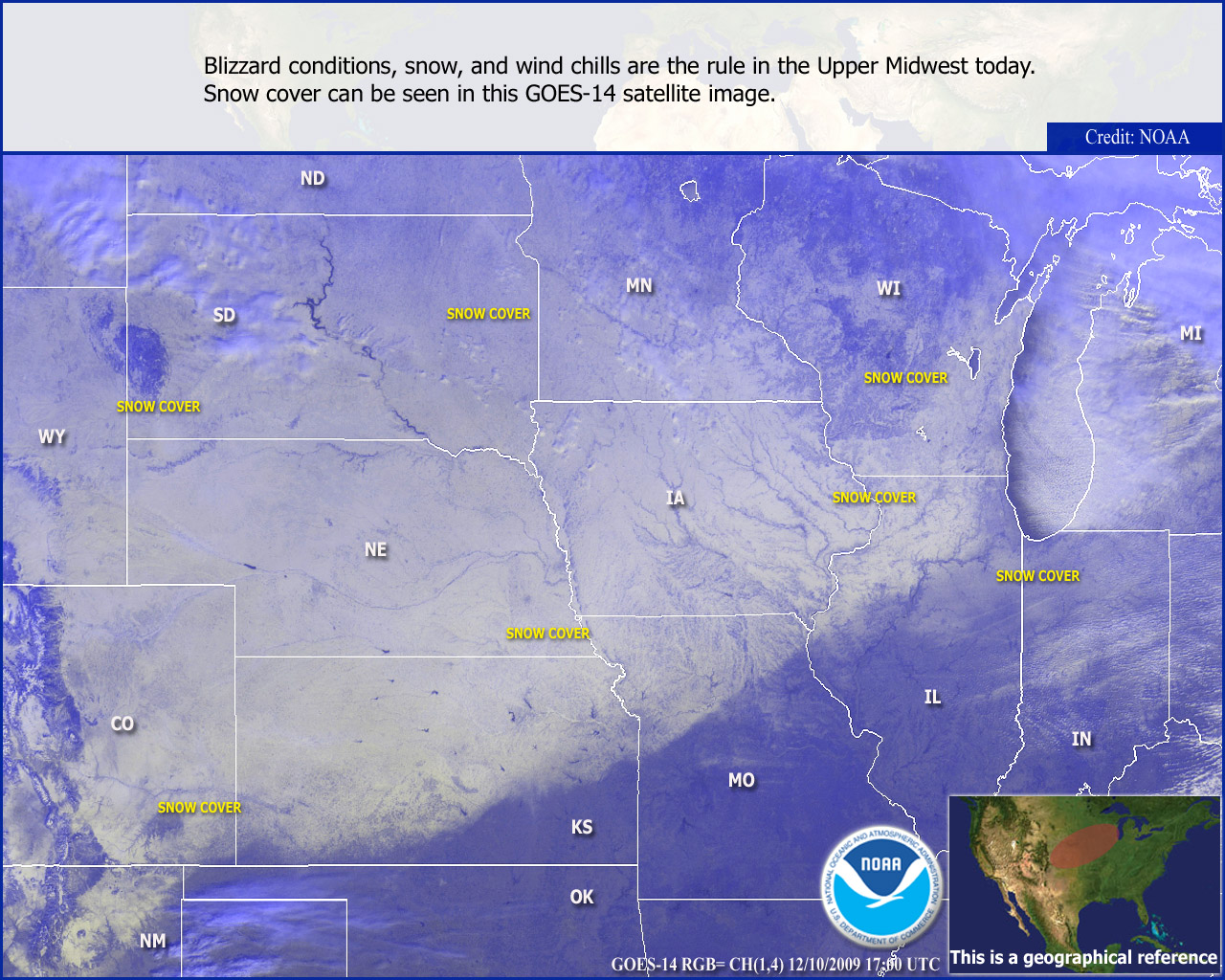 The first major winter storm of December 2009 occurred on December 6th through 11th. The system moved onshore from the Pacific Ocean, crossed the Rocky Mountains, moved through the Northern Plains States, across the Great Lakes region, and into New England. Snowfall greater than a foot was observed in a string of states from California to Maine. By the time the storm moved into the Atlantic, the percent of the U.S. under snow cover had increased from 29 percent to 53 percent. Blizzard conditions were reported across Minnesota, Iowa, Wisconsin, and Michigan with many stations in these states experiencing snow accumulations ranking in the top five for any given storm. 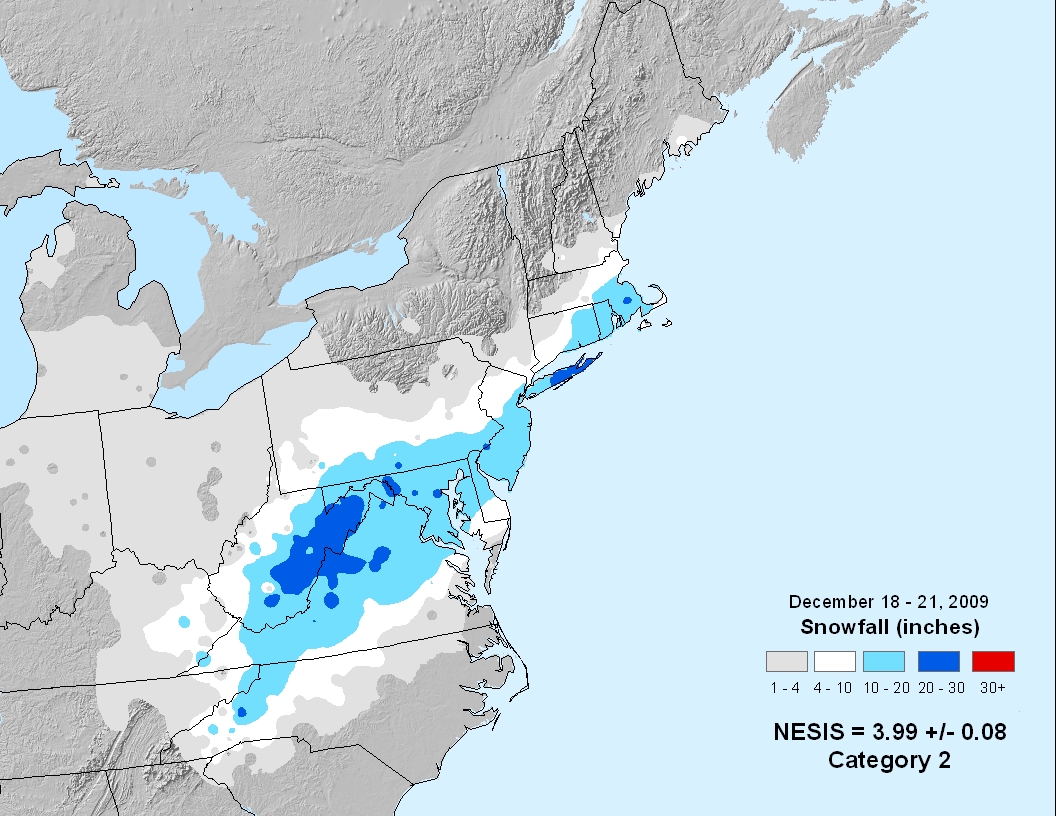 The second major winter storm of December affected the Mid-Atlantic and Northeast on December 18th through 21st leaving behind 1-2 feet (30.5 cm - 61.0 cm) of snow from North Carolina to New England. The storm originated in the Gulf of Mexico and moved along the Eastern Seaboard, developing into a classic Nor’easter. At one point, the storm was over 500 miles (800 km) in width, eventually affecting 14 states and tens of millions of Americans. The heavy snow crippled the densely populated corridor from Richmond to Boston. Blizzard conditions were reported in Philadelphia, which received 23.4 inches (59.5 cm) of snow accumulation, the city's second highest snowfall for a single event. Philadelphia typically receives 19.3 inches (49.0 cm) for an entire winter season. Washington, D.C. at Reagan National Airport, had its snowiest calendar day in history with 15.0 inches (38.1 cm) of snowfall, surpassing the previous record of 11.5 inches (29.2 cm) set on December 17th, 1932. The storm was given a preliminary score of 4.03 on the Northeast Snow Impact Scale (NESIS), categorizing the storm as 'major' and ranking it in the top 25 winter storms to affect the region.

The third major winter storm of December presented a huge part of the country with a white Christmas. The large storm produced blizzard conditions from Texas to the U.S.- Canadian border on December 24th through 27th. Before the onset of the heavy snowfall, portions of the Midwest experienced a freezing rain event, adding to the destruction of the storm. Dallas, TX observed its first snowfall on Christmas Eve on record. Daily and storm snowfall records were shattered all across the region. Oklahoma City received 13.9 inches (35 cm) snow in 24-hours, breaking the previous 24-hour record and the previous total storm accumulation. The storm brought the percentage of the U.S. under snow cover to a monthly high value of 64.1 percent.