November was cooler than average for several western U.S. states, and near– normal, or wetter than average for many of the northern states. These weather conditions were associated with significant snowfall in both parts of the country. International Falls, Minnesota experienced their second snowiest November on record with 29.0 inches (74 cm). According to the Rutgers Global Snow Lab, a NOAA supported facility, the average snow extent across the United States for November 2010 ranked as 4th largest (42nd smallest) in the 45–year satellite record at 679,540 million square miles (1.76 million square km) — 248,650 square miles (644,000 square km) above the long–term average of 428,570 million square miles (1.11 million square km). On November 1st, 4.5 percent of the contiguous U.S. was snow covered — northern New England and New York, parts of the Northern Plains, and the high terrain of the West. By the end of the month, the percentage of the country with snow on the ground increased to 35.4 percent with snow present across the Northeast, Northern Plains, and most of the West. 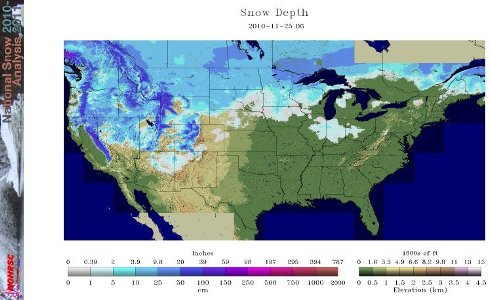 A large winter storm moved across the western and north central United States between November 22nd and 25th. The storm moved onshore on the 22nd along the Pacific Northwest coast, bringing rare November snowfall to Seattle, Washington, where a daily snow record was shattered with 2.5 inches (6.3 cm) of accumulation. The storm brought 7.5 inches (19 cm) of snow to Spokane, Washington in 24 hours, marking the largest 24–hour snowfall for the city during November on record. November 2010 was also the 5th snowiest November on record for the city. The system also brought record low temperatures to the region. As the storm moved into the Intermountain West, it brought heavy snow to the northern and central Rockies. Ski resorts from California to the Colorado Rockies reported several feet of snow from the storm system, bringing an early opening to the ski season. Snowfall amounts of six inches (15.2 cm) were also widespread across the lower elevations of Idaho, Wyoming, and Utah, while heavier amounts were reported at higher elevations. The storm moved into the Northern Plains on the 23rd and 24th, bringing over 10 inches (24.5 cm) of snow to the Dakotas and Minnesota. The major impact of the storm was the hassle it caused for the heavy holiday traffic — it is estimated that 40 million Americans were travelling for the Thanksgiving holiday.

More information on severe winter weather that affected the U.S. during November can be found in our Global Hazards report.