NOAA and its partners have released the latest Regional Climate Impacts and Outlooks, which recap autumn conditions and provide insight into what might be expected this winter.

During meteorological autumn (September-November), the average temperature for the Lower 48 was 56.7°F, 3.1°F above average, ranking third warmest in the historical record. Autumn temperatures were above average across most of the contiguous U.S. Montana, Wyoming and Colorado ranked second warmest for this three-month period with 14 additional states ranking among their five warmest autumns. The Alaska statewide average temperature for autumn was 23.8°F, 2.1°F below average, ranking in the coldest third of the historical record. Temperatures were below average across much of the West Coast, western Interior, south-central and southeastern portions of the state. 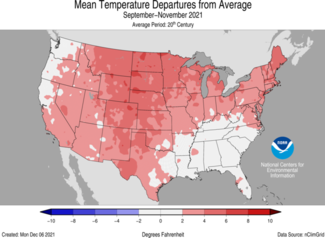 The national autumn precipitation total was 6.81 inches, 0.07 inches below average, ranking in the middle third of the historical record. Precipitation was above average across parts of the West, northern Plains, Ohio Valley, Northeast and Southeast. Washington state ranked sixth wettest for this three-month period. Precipitation was below average across portions of the Southwest, northern Rockies, central to southern Rockies, southern Plains, Lower Mississippi River Valley, western Great Lakes, and the Carolinas and Virginia. Autumn statewide precipitation ranked in the driest third of the historical record in Alaska. 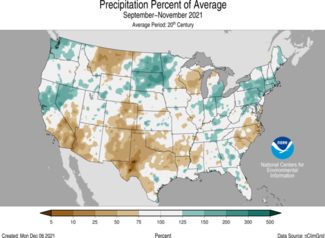 Get more details for your region in the December 2021 climate impacts and outlooks summaries:

NOAA’s Regional Climate Services lead the production of these quarterly summaries of climate impacts and outlooks for various regions of the United States, as well as parts of Canada along the border. This effort, which began in 2012, now includes as many as 11 unique regional products, all produced collaboratively with partner organizations.

You can access all of the Climate Impacts and Outlooks summaries, as well as additional reports and assessments, through the U.S. Drought Portal Reports web page at Drought.gov.