NOAA and its partners have released the latest Regional Climate Impacts and Outlooks, which recap winter conditions and provide insight into what might be expected this spring.

The winter (December-February) average contiguous U.S. temperature was 34.8°F, 2.5°F above average, ranking in the warmest third of the winter record. Winter temperatures were above average across much of the Lower 48 with Georgia and South Carolina each experiencing their seventh-warmest winter on record. Temperatures ranked near average from the Pacific Northwest to the western Great Lakes with no states ranking below average for the winter season.

The Alaska December-February temperature was 6.3°F, 2.7°F above the long-term average, ranking among the middle one-third of the 97-year record. Above-average temperatures were observed across the Aleutians, Bristol Bay, Cook Inlet and the southern half of the West Coast, Central Interior and Southeast Interior regions. Temperatures were below average across portions of the North Slope and the southern Panhandle. 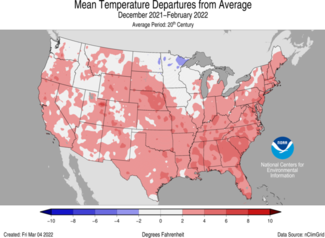 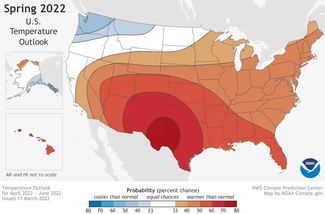 The winter precipitation total for the contiguous U.S. was 5.76 inches, 1.03 inches below average, and ranked as the 12th-driest winter in the 127-year period of record. Precipitation was above average across parts of the Upper Mississippi, Ohio, and Tennessee valleys. Minnesota had its 10th-wettest winter. Precipitation was below average across portions of the West, central and southern Plains, Gulf Coast and across parts of the Southeast and Mid-Atlantic. Louisiana had its third-driest winter on record with Nebraska ranking fourth-driest and Kansas, fifth-driest. Climatologically speaking, winter is the wet season across much of the western United States. If the dry conditions experienced in January and February across portions of the West were to continue into March and April, insufficient water resources may result during the dry season (summer), as well as an increased potential for drought intensification and wildfires in the fall. 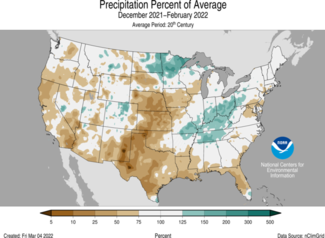 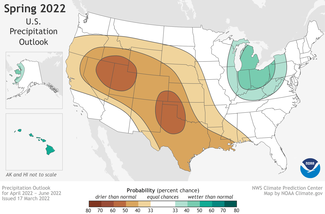 Get more details for your region in the March 2022 climate impacts and outlooks summaries:

NOAA Addresses Climate in Each State

Assessing the Global Climate in July 2020

For May, the average contiguous U.S. temperature was 60.8°F, 0.6°F above the 20th-century average and ranked in the middle third