When it was dedicated in 1874, the Eads Bridge in St. Louis was the first to be constructed of true steel and was touted as being “tornado-proof.” For two decades, the bridge had resisted several storms and floods, bolstering its indestructible reputation. But, on May 27, 1896, a fearsome tornado wreaked havoc across St. Louis that not even the mighty bridge could completely withstand.

Weather Conditions Set the Stage for the Great Cyclone

That fateful Wednesday began as many summer days still do in the Midwest—warm and muggy. By midafternoon, a storm system had moved over Illinois and Missouri, blanketing the St. Louis area with thick clouds. Just after 5:00 p.m., the storm broke forth with torrential rain, thunder, and lightning.

Moments later, the clouds took on a greenish hue and began to swirl ominously. The barometric pressure dropped significantly. And, what would become known as the “Great Cyclone” or the “Great St. Louis Tornado” touched down 6 miles west of Eads Bridge.

In less than half an hour, the tornado carved a three-mile-wide path of destruction across St. Louis. It would most likely be rated as an EF4 today, with winds estimated between 168 and 199 mph. While it was just one of nearly 40 tornadoes to touch down in the central and southern parts of the country between May 15 and May 28, the Great St. Louis Tornado of 1896 still remains the third deadliest tornado in the United States.

The Disaster of a Generation

This single tornado is estimated to have killed at least 255 people and injured another thousand. According to the May 29, 1896, edition of the Chicago Tribune, “In all probability the exact number of those whose lives were crushed out by falling walls or who met their fate under the waters of the raging Mississippi will never be known.” 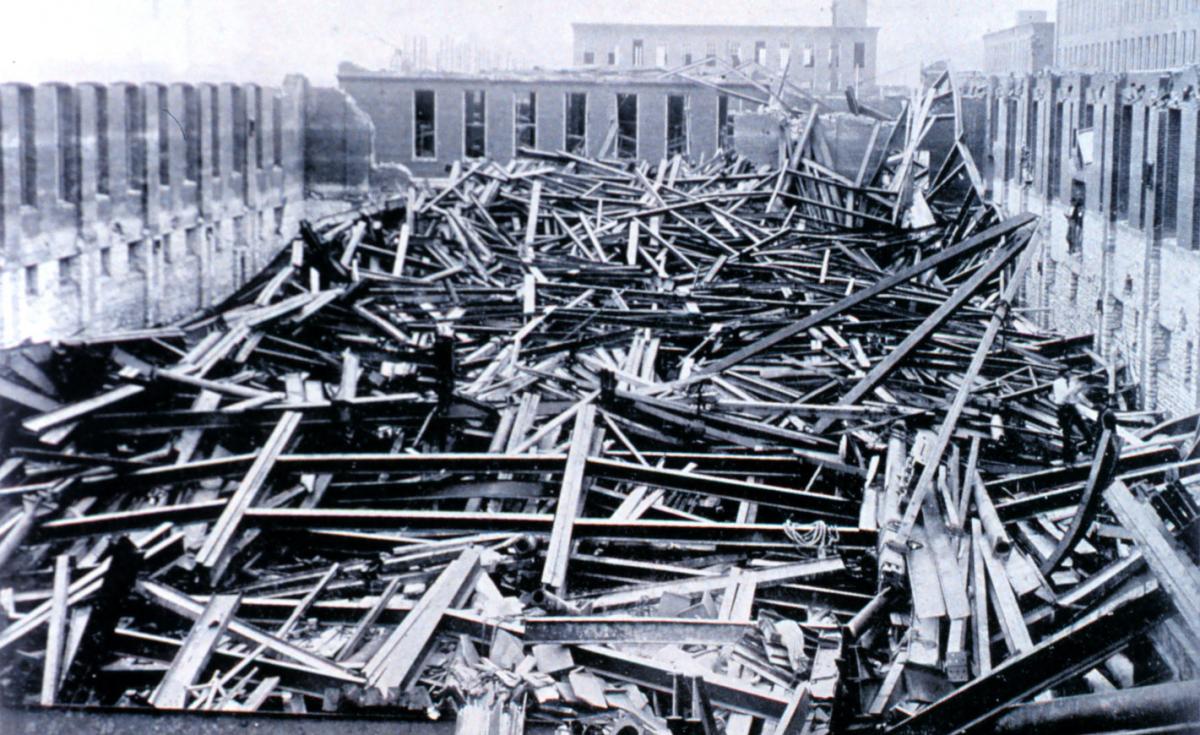 According to the Missouri Weather Bureau Report for May 1896, the tornado caused as much as $25 million in damages—approximately $700 million today. It also rendered countless families homeless as it flattened entire neighborhoods and block after block of residential housing. Much of the central portion of St. Louis was destroyed as were factories, saloons, hospitals, mills, railroad yards, and churches throughout the city.

Hundreds of miles of electric wires and thousands of telephone and telegraph poles were torn down by the fierce winds. The tornado also uprooted trees more than half a century old and hurled them several blocks. Heavy iron fences, like one that surrounded Lafayette Park, were twisted and tangled until they were nearly unrecognizable. The tornado even shot a shovel six inches into the trunk of a tree.

Destruction Across the Mississippi River

Once the tornado made it to the Mississippi River, it decimated steamboats and other vessels in the harbor, breaking them into pieces and scattering them from the Missouri to the Illinois shore. And, while the sturdy Eads Bridge remained standing, nearly 300 feet of its eastern approach was torn away. Pieces of the bridge weighing several tons were even scattered 100 feet away.

After it battered the Eads Bridge, the tornado continued across the Mississippi into East St. Louis, Illinois, where it did the worst of its damage. Scarcely a house or building remained standing, with everything along the river completely swept away.

A Community Comes Together

Once the danger had passed, volunteers from across the city and surrounding areas came together to help the wounded. They dug through massive amounts of debris, set up a makeshift hospital, and used every means available to help the injured as quickly as possible. And, they continued their work well into the early hours of the next morning.

Once communication was restored, the rest of the country learned of the devastation and many more offers of aid came to the affected people and areas. Within a few weeks the city was able to begin rebuilding. And, just eight years later, the once-again bustling city of St. Louis, Missouri, hosted the 1904 World’s Fair.

For more information on how you can prepare yourself, your family, and your friends for tornadoes and severe weather, visit Ready.gov.

Prepare for Tornadoes with Ready.gov
Deadliest Tornadoes in the United States
U.S. Tornado Climatology
Text Accompanying Photographic Views of the Great Cyclone at St. Louis
May 29, 1896, Edition of the Chicago Tribune

Missouri Weather Bureau Report for May 1896

According to the February 12, 2019, U.S. Drought Monitor, moderate to exceptional drought covers 13.6% of the United States