Every February 2, a crowd of thousands gathers at Gobbler’s Knob in Punxsutawney, Pennsylvania, to await a special forecast from a groundhog named Phil. If the 20-pound groundhog emerges and sees his shadow, the United States can expect six more weeks of winter weather according to legend. But, if Phil doesn’t see his shadow, we can expect warmer temperatures and the arrival of an early spring.

Even though he’s been forecasting since 1887, Phil’s track record for the entire country isn’t perfect. To determine just how accurate he is, we’ve compared U.S. national temperatures with Phil’s forecasts. On average, Phil has gotten it right 50% of the time over the past 10 years.

In 2020, Phil forecast a "short winter" when he did not see his shadow and predicted an early spring. In fact, the contiguous United States saw above-average temperatures in both February and March of last year.

The average contiguous U.S. temperature during February 2020 was 36.2°F, 2.3°F above the twentieth-century average. This ranked among the warmest one-third of the 126-year period of record.

Much-above-average temperatures were observed across parts of the Mid-Atlantic and Northeast as well as portions of California and Florida. New Jersey ranked third warmest, while Rhode Island and Delaware ranked fifth warmest.

However, below-average temperatures were observed across portions of the central Rockies to western Texas and also in Alaska during February. The Alaska February temperature was 1.6°F, 3.2°F below the long-term average. This ranked among the coldest one-third of the 96-year period of record for the state and was the coldest February since 1999.

During March 2020, the average contiguous U.S. temperature was 46.1°F, 4.6°F above the twentieth-century average. This ranked as the 10th-warmest March in the 126-year period of record.

Above-average temperatures were observed from the Rocky Mountains to the East Coast. Record warmth was observed across most of the Gulf Coast, and contributed to the warmest March on record for Florida. Seventeen additional states from Texas to New England experienced a top-10 warm month. The Alaska March temperature was 12.0°F, 1.2°F above the long-term average. This ranked in the middle third of the 96-year period of record for the state and was the coldest March since 2017.

However, California ranked cooler than average with five additional Western states ranking near average for the month.

In 1887, when he made his debut as the official groundhog forecaster for the entire country, Phil saw his shadow. His first prediction of six more weeks of winter was accurate for a few regions, but it came up short for several others.

Predicting the Arrival of Spring Is Difficult

Predicting the arrival of spring for an entire country, especially one with such varied regional climates as the United States, isn’t easy! However, if you’re interested in doing your own analysis, check out our Climate at a Glance tool to access historical U.S. monthly temperature data. More of Phil’s past predictions are also available from the Punxsutawney Groundhog Club.

For an overview of some fun facts about Groundhog Day and the accuracy of these furry forecasters, check out our infographic. 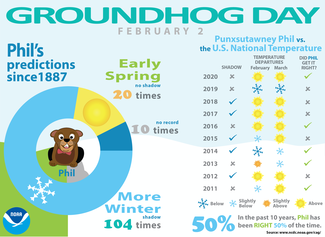 Now includes the latest analysis and climate information for 2020.

According to the February 27, 2018, U.S. Drought Monitor, moderate to extreme drought covers 31.3% of the contiguous United