As we head further into the Northern Hemisphere’s spring, many people across the country are ready to put winter—and its cold and snow—behind them. But, even the spring months can have their cold spells. So, when can we expect the cold to really be on its way out? Our “Day of the Last Spring Freeze” map, which is based on climatology, can help answer that question for your area. 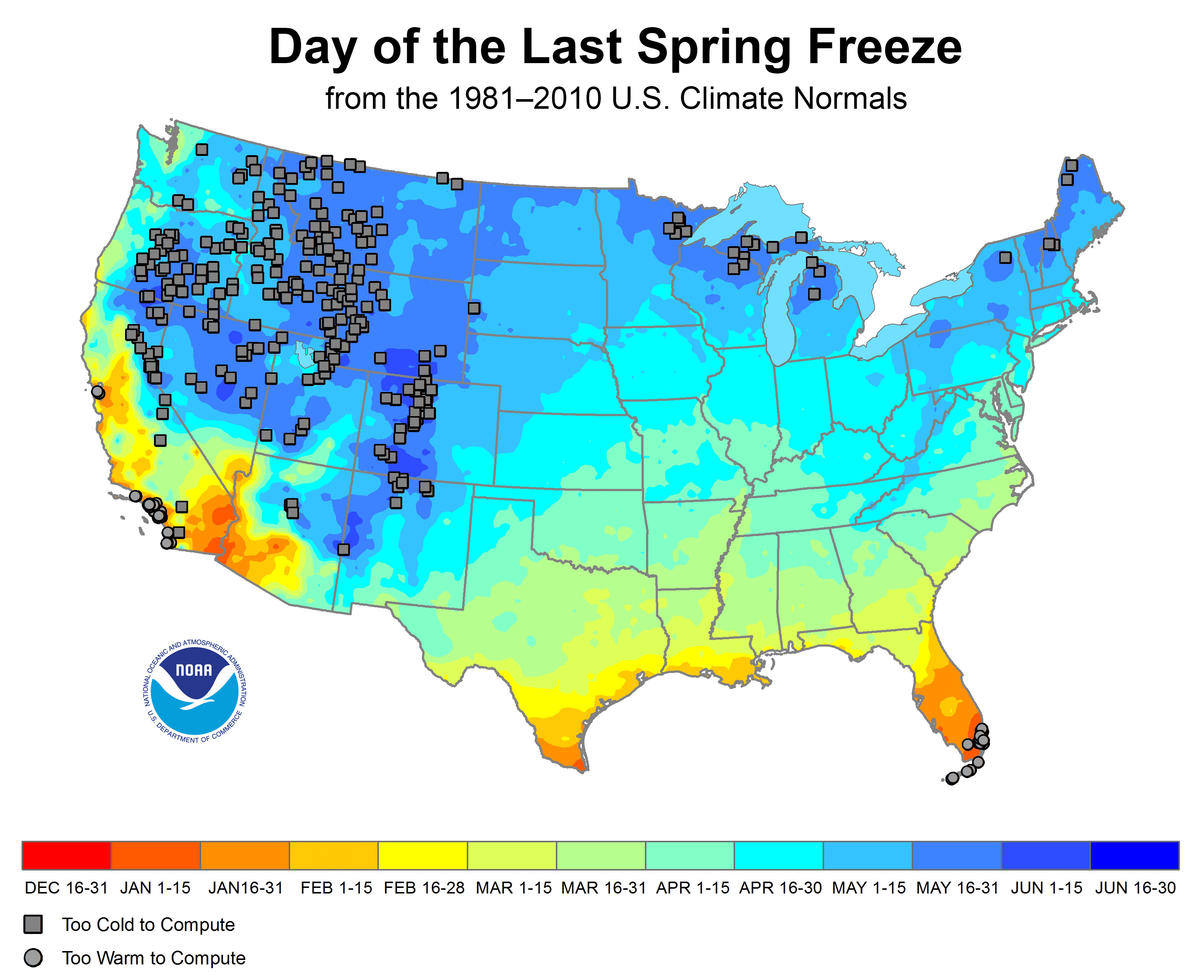 Derived from the 1981–2010 U.S. Climate Normals—30-year averages of climatological variables like temperatures—this map shows the time of year, on average, that areas across the nation can expect to see their temperatures dip to 32°F or below for the last time. The map reveals some interesting regional differences across the country. In the East, the last spring freeze date generally progresses through time as you move northward on the map. However, in the West, the changes are much more complex due to elevation and coastal influences.

Wondering what happened to Alaska, Hawaii, and Puerto Rico? The unique climates of these regions pose a problem in calculating the average date of the last spring freeze. Nearly all of Alaska falls into the “too cold to compute” category, meaning that the state is likely to see freezing temperatures year-round. At the opposite end of the spectrum, all of Puerto Rico and all but the highest elevations of the state of Hawaii fall into the “too warm to compute” category, meaning that they very rarely or never see freezing temperatures.

Freeze Normals are especially useful to agriculture and gardening. For farmers, planting early can yield high rewards, but it also poses a significant risk to their plants. Freeze Normals can help them determine when they’re most likely to see their last spring freeze, allowing them to mitigate some of that risk. Additionally, these Normals can help determine when pests are likely to emerge in specific areas. And, plant nurseries use these Normals and the information they provide about planting and growing conditions to help determine where and when to advertise plants and seeds to customers in a specific area.

While this map shows the average timeframe of the last spring freeze across the United States, this year’s actual conditions may vary widely based on weather patterns. For prediction of your actual local daily temperature, and to see how it matches up with the Climate Normals, check out your local forecast office on Weather.gov.

Drops description of map as new.

The November 22–30, 1950, Great Appalachian snowstorm ranked as a Category 5 event for the Ohio Valley on the Regional Snowfall Index.

According to the February 21 U.S. Drought Monitor, moderate to extreme drought covers 13.8% of the contiguous U.S.