Drought sets records across the contiguous U.S. in 2022 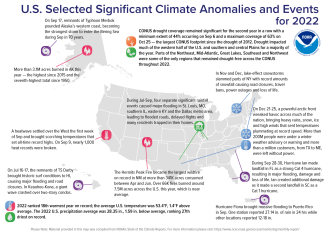 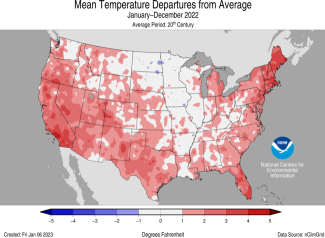 For the year, temperatures were above average from the West Coast to the Gulf of Mexico and from Florida to New England and into the Great Lakes. Florida and Rhode Island ranked fifth warmest while Massachusetts ranked sixth warmest in the 128-year record. Four additional states experienced a top-10 warmest January-December on record. A heatwave across the southern Plains began in April and lasted well into the summer, giving Texas their warmest (and fourth driest) April to July on record.

The Alaska January-December temperature was 28.6°F, 2.6°F above the long-term average, ranking 16th warmest in the 98-year record for the state. Above-average temperatures were observed across the vast majority of the state for this annual period with portions of the eastern Interior and Panhandle near average. 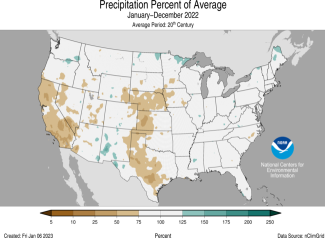 Precipitation was above average across the lower Mississippi Valley to New England, portions of the northern Plains, Great Lakes, and parts of the Pacific Northwest, Southwest and Rockies. Precipitation was below average across much of the West, central and southern Plains, and parts of the Great Lakes and Southeast. Nebraska ranked fourth driest while California ranked ninth driest on record. 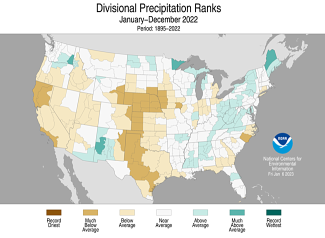 Drought expanded across the West in early 2022 and reached a peak coverage of 91.3% of the region on May 3. Drought coverage across the West shrank as the summer monsoon reduced some of the coverage in the Southwest. The multi-year western U.S. drought resulted in water stress/shortages across many locations in 2022 as some major reservoirs dropped to their lowest levels on record.

Extreme short-term dryness across the Ohio and Tennessee valleys during late summer/early fall, combined with persistent dryness across the Missouri and Arkansas-White-Red River basins, resulted in reduced streamflow in the Mississippi River to the lowest water levels in a decade, closing off a vital channel to barge traffic at a crucial time of the year for transport of crops from the nation’s heartland.

During 2022, 14 named storms formed in the North Atlantic Basin (four tropical storms, eight hurricanes and two major hurricanes), which is near the historical average.

August had no tropical storm activity in the North Atlantic Basin, with 2022 becoming only the third year, along with 1961 and 1997, since 1950 to have no activity during the month.

Several notable storms brought destruction and flooding to portions of the U.S. and its territories during the months of September and November:

In addition to the active wildfire year across the western U.S., Alaska saw one million acres burned by June 18 — the earliest such occurrence in a calendar year than anytime in the last 32 years. By July 1, 1.85 million acres had been consumed — the second-highest June total on record and the seventh-highest acreage burned for any calendar month on record for Alaska.

Snowfall during the 2021-2022 snow season began in earnest with several atmospheric river events that brought early accumulations to parts of the Sierra, Cascades and central Rockies in October and December 2021. The snow season across the West waned during the second half of winter and ended with below-average snowpack across much of the region. From the central Plains to the Great Lakes and into the Northeast, snowfall was below average in December 2021. By January 2022, snow cover was above average across portions of the northern Plains, Midwest, Great Lakes and from the Appalachians to the Northeast. February remained well below average from the northeastern Rockies to the central Plains and across the central Appalachians.

The 2022-2023 snow season was off to a good start during December 2022 after a powerful arctic front brought heavy snow across much of the country. More than 55% of the contiguous U.S. was covered by snow across much of the Pacific Northwest and mountainous West to the Tennessee Valley and from the Tennessee Valley to New England on Christmas Eve. During the last week of December and first week of January 2023, a series of strong atmospheric rivers ushered in copious amounts of rain to much of California and snow to the Sierra Nevada Range, helping to reduce drought and build up the winter snowpack.

The U.S. Climate Extremes Index (USCEI) for 2022 was near average and ranked in the middle third of the 113-year record. Elevated warm extremes in both maximum and minimum temperature were observed across portions of the Northeast, Southeast, South, Southwest and West. Elevated extremes in dry Palmer Drought Severity Index values were also seen across much of the western U.S. The USCEI is an index that tracks extremes (falling in the upper or lower 10% of the record) in temperature, precipitation, drought and landfalling tropical cyclones across the contiguous U.S. 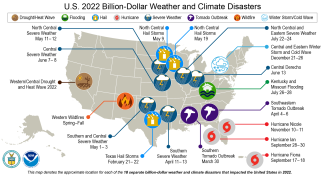 The U.S. disaster costs for 2022 exceeded $165 billion, which is the third-highest cost on record.

This is also a record eighth-consecutive year where the U.S. experienced 10 or more billion-dollar disasters.

Since records began in 1980, the U.S. has sustained 341 separate weather and climate disasters where overall damages/costs reached or exceeded $1 billion (based on the CPI adjustment to 2022) per event. The total cost of these 341 events exceeds $2.475 trillion.

* Accumulated Cyclone Energy (ACE) is an integrated metric of the strength, frequency and duration of tropical systems.

The October nationally averaged temperature was 55.7°F, 1.6°F above the 20th century average, and ranked among the warmest third

Assessing the Global Climate in August 2021

The global temperature for August 2021 was the sixth highest for the month of August in the 142-year NOAA record, which dates

Assessing the U.S. Climate in March 2018

In the first three months of 2018, there have been three weather and climate disaster events with losses exceeding $1 billion