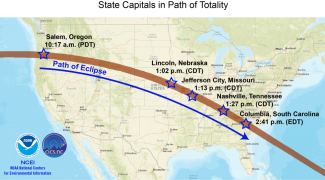 When the sun flared dramatically in September 2017, causing geomagnetic storms and radio blackouts on Earth, a new NOAA solar

Navigating Our Planet with Magnetic Models

The Science, Beauty, and Mystery of Auroras

A geomagnetic storm lies behind every inspiring aurora in our skies. The mystery behind these shimmering curtains of neon-like