Reporting on the State of the Climate in 2021

A new State of the Climate report confirms that concentrations of the most dominant greenhouse gases—methane, nitrous oxide, and carbon dioxide (CO2)—reached new record highs in 2021. The gases are the three largest contributors to Earth’s warming.

The annual global average CO2 concentration grew at its fifth-highest rate since 1958, the start of the instrumental record. At 414.7 ppm (± 0.1), CO2  reached the highest concentration in the modern record and in records dating back 800,000 years via data derived from ice cores.

Overall, 2021 was marked more by trends that were ameliorated, rather than enhanced, by shorter-term phenomena, most notably the “double dip” La Niña, according to the State of the Climate in 2021, released by the American Meteorological Society (AMS) and led by NCEI.

The 32nd annual issuance of the report is based on contributions from more than 530 scientists from 67 countries around the world and reflects tens of thousands of measurements from multiple independent datasets. Both highlights and the full report are available online. 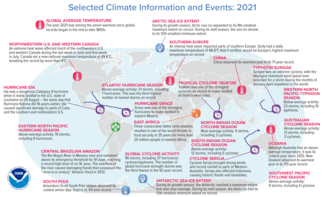 2021 Highlights: State of the Climate

Report highlights include these indications of a warming planet:

Specifics about the Tropics, the Mid-Latitudes, the Arctic, the Antarctic and Southern Ocean, regional climates, and the ocean are detailed in the report.

Full State of the Climate in 2021 Report

Assessing the U.S. Climate in August 2019

Assessing the Global Climate in January 2017