According to the April 23, 2019, U.S. Drought Monitor, moderate to severe drought covers 2.6% of the United States, a decrease from last week’s 3.8%. The worst drought categories (extreme to exceptional drought) stayed the same as last week—0%—for the fifth week in a row.

The atmospheric circulation behaved as if it had two distinct personalities. On the one hand, the jet stream continued its seasonal northward retreat as spring progressed, but on the other hand, its meridional nature persisted with a couple of upper-level closed lows moving across the southern portion of the contiguous U.S. The retreating jet stream allowed warmer-than-normal air to spread across most of the contiguous U.S., and associated ridging acted to inhibit precipitation, while the closed lows and their associated Pacific fronts tried to counter the upper-level ridging.

The lows and fronts spread clouds and above-normal precipitation across parts of the West, much of the southern Plains to Tennessee and Ohio Valleys, and parts of the Great Lakes and East Coast. The rain and clouds kept temperatures cooler than normal from the Texas coast to the Southeast. One of the closed lows—a strong frontal and upper-level low-pressure system on April 18–19 generated widespread severe weather across the South to coastal Southeast in addition to heavy rain. As a result of the week’s precipitation pattern, an area of abnormal dryness returned to the far northern Plains, but drought continued to contract in the West and South, setting a new record low drought area for the country, according to the U.S. Drought Monitor.

Abnormal dryness and drought are currently affecting over 30 million people across the United States—about 9.8% of the country’s population. 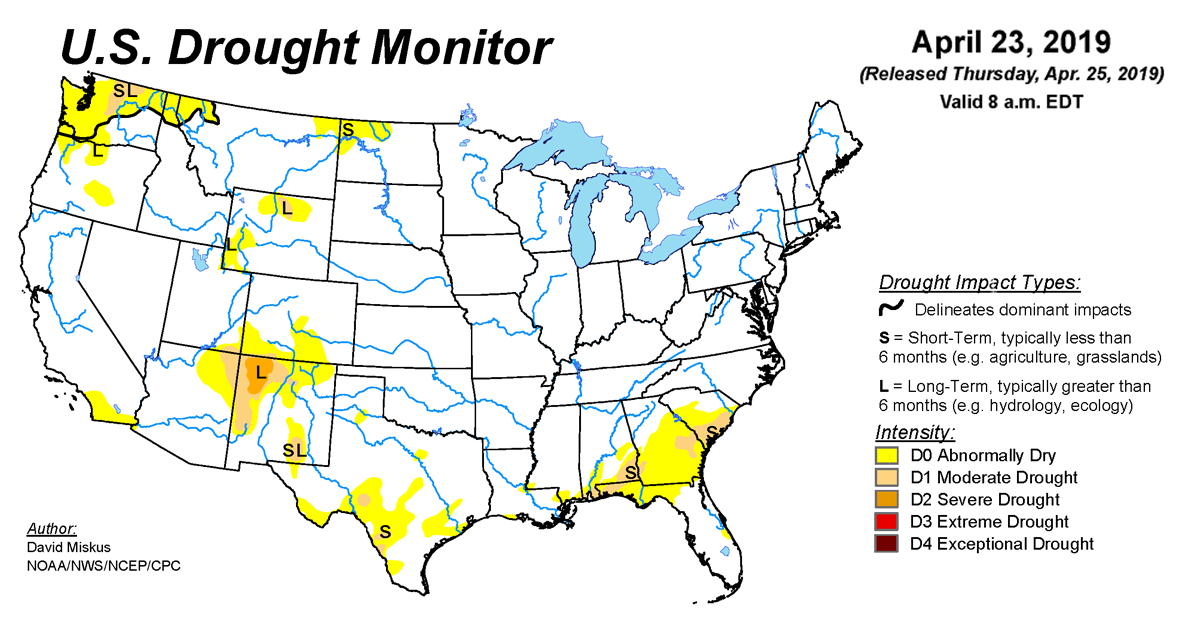