The atmospheric circulation over the contiguous United States was dominated by the North Pacific High in the west and the Bermuda High in the east. These subtropical high-pressure systems reinforced upper-level ridges along the west and east coasts of the contiguous United States. An upper-level trough occupied the region between the ridges and extended from Hudson Bay to the western Great Lakes. Cold fronts migrated into this region and became stationary fronts from the central and southern Plains to the Ohio Valley.

Gulf of Mexico and Atlantic moisture was funneled into the Southeast and Mid-Atlantic states by the Bermuda High. The moisture encountered the fronts, which enhanced shower and thunderstorm activity. Above-normal precipitation across the Southeast to Mid-Atlantic states was compounded by the arrival of the remnants of Tropical Storm Fred near the end of the week. Meanwhile, monsoon showers and thunderstorms gave parts of the Southwest to southern High Plains a wetter-than-normal week. On the other hand, the western ridge and a downstream northwesterly flow kept much of the West, central to northern Plains, and Upper Mississippi Valley drier than normal. Weekly temperatures were cooler than normal in the  Southwest and southern Plains beneath the monsoon rains, and warmer than normal in the West, northern Plains, and Mid-Atlantic to Northeast beneath controlling influences of the upper-level ridges.

Drought contraction occurred in the Southwest and southern to central Appalachians where above-normal precipitation fell, while expansion or intensification happened in other parts of the West, and in the central and southern Plains to Upper Mississippi Valley. Overall, expansion exceeded contraction, with the nationwide moderate to exceptional drought area increasing this week.

Abnormal dryness and drought are currently affecting over 108  million people across the United States including Puerto Rico—about 34.7% of the population. 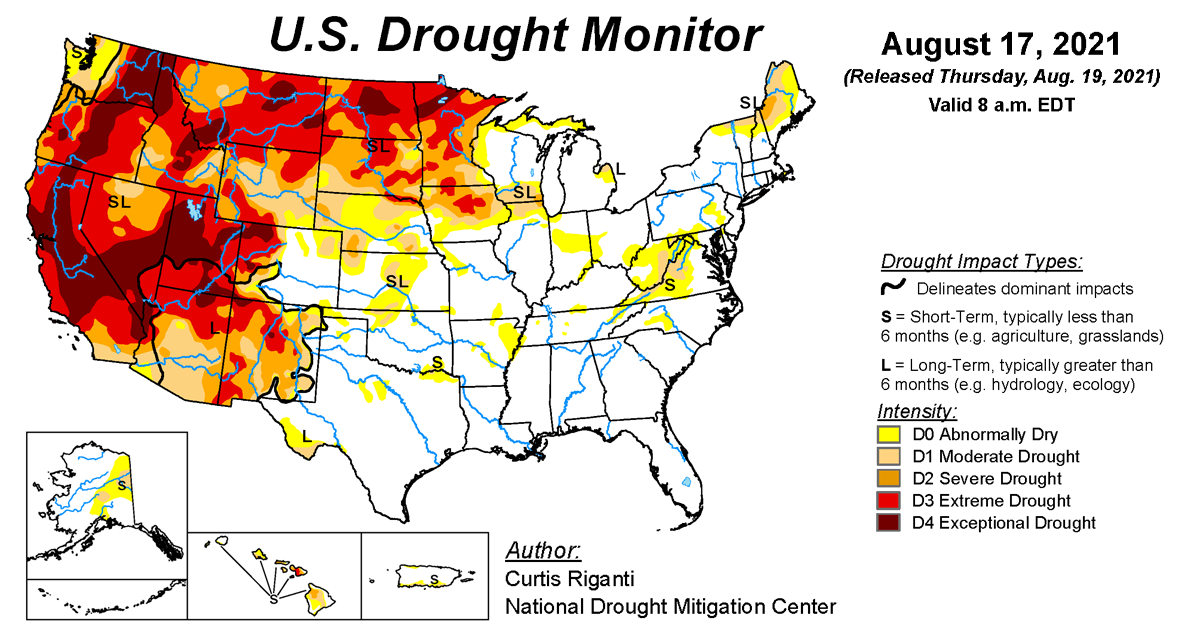 According to the June 22, 2021, U.S. Drought Monitor, moderate to exceptional drought covers 39.9% of the United States