The atmospheric circulation over the contiguous United States was dominated by an upper-level trough over the West and a high-pressure ridge over the South and East. This overall pattern was complicated by the remnants of Tropical  Storm Fred, which moved across  the Southeast and Northeast along a cold front early in the week, and Tropical Storm Henri, which moved across New England near the end of the week. These systems left a band of above-normal weekly rainfall totals that stretched from the southern Plains to the Appalachians and into the Northeast. Meanwhile, fronts and surface lows associated with the trough in the West generated above-normal precipitation from Utah in the Great Basin to the northern Rockies and northern Plains. Areas farther west, plus the Great Lakes and southern High Plains, were drier than normal this week.

Temperatures averaged cooler than normal from the Rockies to the West Coast beneath the trough, and warmer than normal from the Plains to East Coast beneath the ridge. Drought contraction occurred in the Southwest, parts of the Plains, and in the southern to central Appalachians where abundant rain fell, while expansion or intensification happened in parts of the central Plains to Ohio Valley and Great Lakes. Overall, contraction exceeded expansion for the 50 States and Puerto Rico, with the nationwide moderate to exceptional drought area decreasing this week.

Abnormal dryness and drought are currently affecting over 103  million people across the United States including Puerto Rico—about 33.1% of the population. 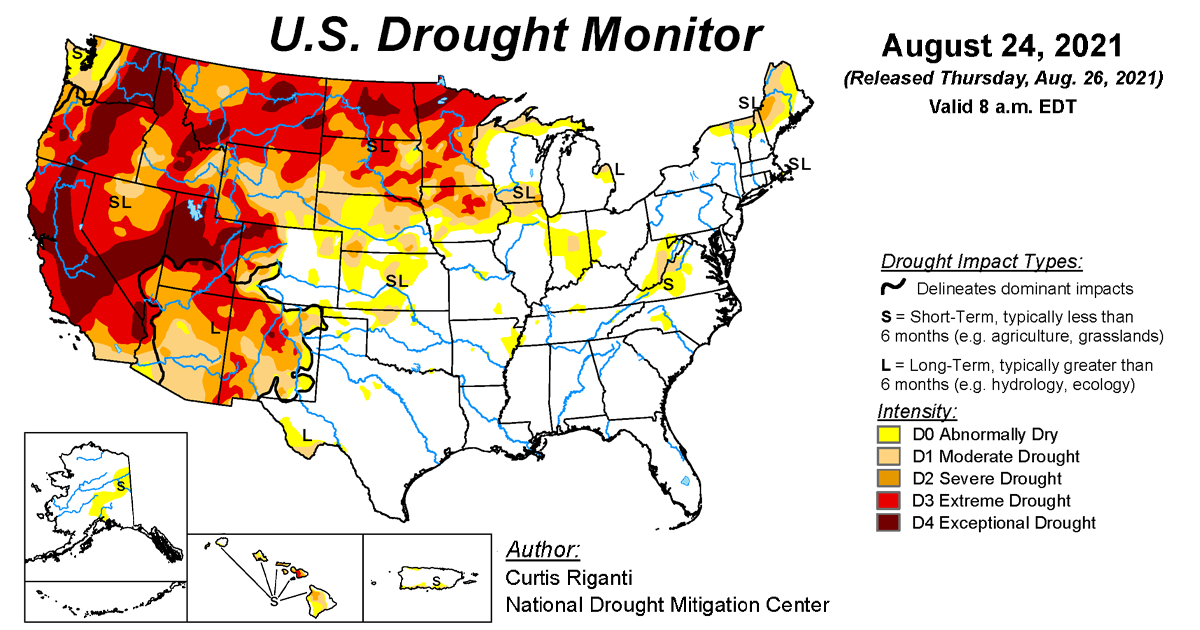 According to the December 31, 2019, U.S. Drought Monitor, moderate to extreme drought covers 9.5% of the United States including

According to the January 30, 2018, U.S. Drought Monitor, moderate to extreme drought covers 38.4% of the contiguous United

According to the September 8, 2020, U.S. Drought Monitor, moderate to exceptional drought covers 32.7% of the United States

According to the October 29, 2019, U.S. Drought Monitor, moderate to extreme drought covers 15.6% of the United States including