According to the August 27, 2019, U.S. Drought Monitor, moderate to extreme drought covers 10.5% of the United States including Puerto Rico, an increase from last week’s 8.0%. The worst drought categories (extreme to exceptional drought) increased from 0.3% last week to 0.4% this week.

The main storm track is along the U.S.-Canadian border this time of year, with upper-level low pressure systems and Pacific weather systems usually following a northern track across the contiguous United States. This week started out that way, but by week’s end a strong upper-level low pressure trough had formed across the northern Plains and Great Lakes. It funneled cold fronts deep into the central part of the contiguous United States, with some penetrating into the Southeast. These fronts and their surface low-pressure systems brought cooler- and wetter-than-normal weather to the northern and central Plains, eastward into the lower and mid-Mississippi Valley, Ohio Valley, and southern to central Appalachians. The Great Lakes to Northeast missed out on the precipitation, but they did have cooler-than-normal temperatures.

Much of the West was warmer and drier than normal beneath an upper-level ridge, with these weather conditions extending into Texas. The weather pattern shifted to an upper-level trough over Alaska that brought cooler- and wetter-than-normal weather to the eastern and panhandle sections of the state, but the west to south central areas continued drier than normal. The net effect of these weather patterns was an expansion of drought and abnormal dryness across southwest Alaska, the southwestern contiguous United States, and parts of the Great Lakes, Northeast, southern Plains, and Southeast. Some of the rain fell over drought areas, shrinking drought or abnormal dryness in the Ohio Valley and other parts of the southern Plains and Southeast. However, expansion outweighed contraction, with the national drought area expanding this week.

Abnormal dryness and drought are currently affecting over 76 million people across the United States including Puerto Rico—about 24.6% of the population. 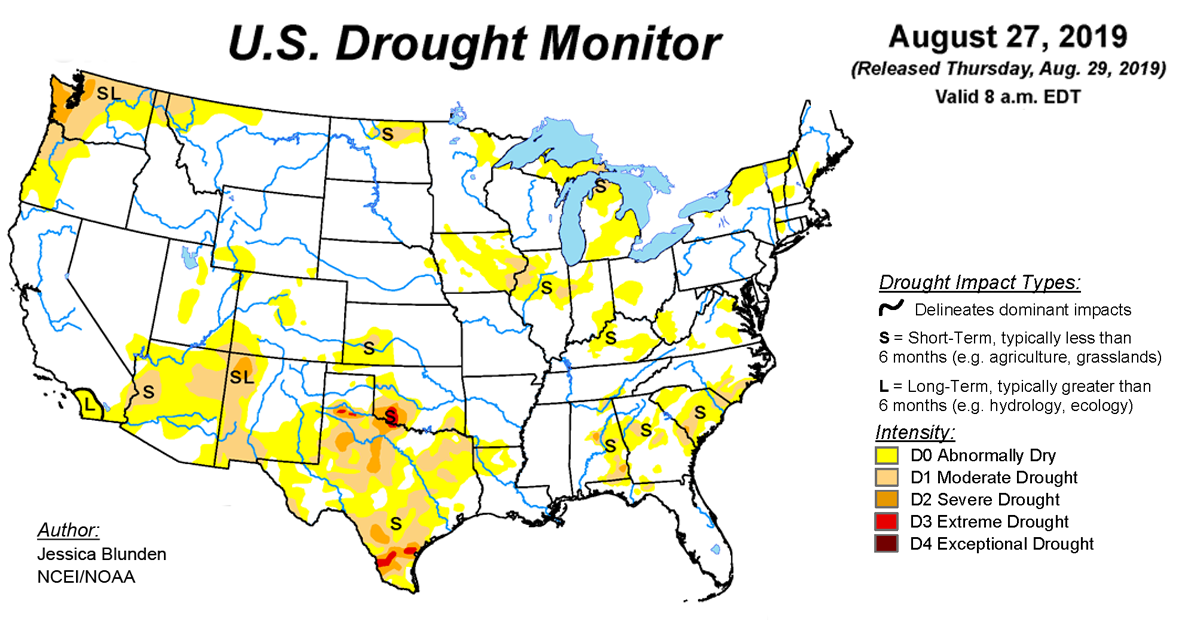 According to the January 23 U.S. Drought Monitor, moderate to extreme drought covers 35.4% of the contiguous U.S.

During February, the average contiguous U.S. temperature was 32.0°F, 1.8°F below the 20th century average.

According to the June 18 U.S. Drought Monitor, moderate to extreme drought covers 4.0% of the United States.