According to the August 4, 2020, U.S. Drought Monitor, moderate to extreme drought covers 28% of the United States including Puerto Rico, an increase from last week’s 27.4%. The worst drought categories (extreme to exceptional drought) increased from 2.4% last week to 2.6%.

The upper-level circulation pattern over the contiguous United States evolved into a high pressure ridge over the West and a low pressure trough over the East. Pacific weather systems migrated over the top of the western ridge then intensified as they dropped into the eastern trough, generating surface lows which produced areas of rain. The northerly flow over central North America, associated with the trough, pushed cooler air masses into the Plains and Midwest. The fronts spread into the South and East, triggering showers and thunderstorms along the way.

To complicate matters, Hurricane Isaias inundated Puerto Rico then was steered by the upper-level trough along a path up the East Coast of the United States, bringing strong winds and heavy rain. The ridge kept much of the West dry and warmer than normal, while the trough brought cooler-than-normal temperatures to much of the country from the Rockies to the Appalachians.

On the east side of the trough, a southerly flow dominated along the East Coast, keeping temperatures warmer than normal. The fronts brought areas of above-normal precipitation to the northern and southern Plains, and heavy rain from the central Plains to central Appalachians where they frequently stalled out. Isaias contributed heavy rain along the Mid-Atlantic coast.

Parts of the Southeast and Upper Midwest missed out on the rain. Isaias did not reach New England by the end of the monitoring week, so much of the region was also drier than normal. Drought or abnormal dryness shrank where it rained across parts of the southern and central Plains and especially from the Ohio Valley to Mid-Atlantic states and in Puerto Rico.

Drought or abnormal dryness expanded or intensified where this week’s dry weather continued a drying trend, especially in the Southwest and Midwest (Iowa), but also in a few spots in the southern Plains, Southeast, and New England. Expansion outweighed contraction, so the U.S. drought footprint grew this week.

Abnormal dryness and drought are currently affecting over 116 million people across the United States including Puerto Rico—about 37.6% of the population. 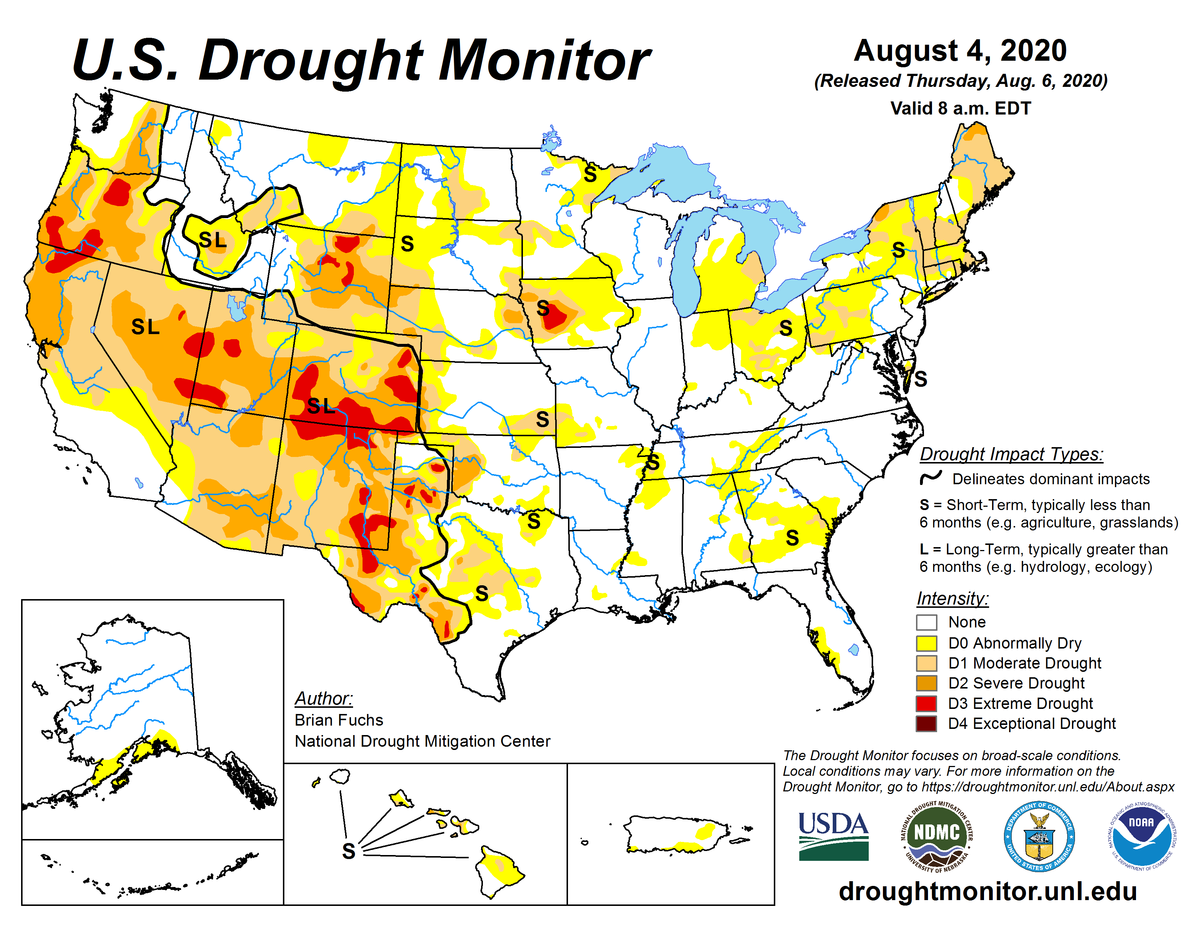 The most recent U.S. Drought Outlook is available from NOAA’s Climate Prediction Center and the U.S. Department of Agriculture's World Outlook Board provides information about the drought’s influence on crops and livestock.

According to the July 16, 2019, U.S. Drought Monitor, moderate to extreme drought covers 6.6% of the United States including