According to the December 12, 2017, U.S. Drought Monitor, moderate to exceptional drought covers 23.9% of the contiguous United States, a slight decrease from last week’s 24.3%. However, extreme drought coverage increased slightly from 1.2% last week to 1.8%. Exceptional drought remained absent from the Lower 48 for a ninth consecutive week.

During this U.S. Drought Monitor week, a large and stable upper-level circulation regime prevailed across the contiguous United States, with a dry high pressure ridge over the West and a deep trough over the East. Pacific weather systems were driven well into Canada by the ridge, leaving the western United States very dry.

As the weather systems moved into the trough over the East, they dragged cold and dry Canadian air masses across the Plains and eastern Lower 48. The cold air quickly plunged east and south, but the circulation kept Pacific and Gulf of Mexico moisture away, so the central to northern Plains ended up warmer and drier than normal.

The Canadian air lingered over the Midwest to Mid-Atlantic and southern Plains to Southeast regions, keeping temperatures colder than normal. But, when the weather systems moving in the jet stream flow reached the bottom of the trough over the Gulf of Mexico, they pulled in Gulf moisture. And, above-normal precipitation fell from southern Texas and the Gulf of Mexico Coast, up to the Mid-Atlantic Coast, as the Gulf moisture was squeezed out of the atmosphere by low pressure systems and cold fronts.

As a result, drought and abnormal dryness contracted from southern Texas to the eastern Gulf Coast but expanded from the Southwest to central Plains and Mid-Mississippi Valley where conditions continued to be very dry.

Abnormal dryness and drought are currently affecting over 136 million people across the United States—about 43.9% of the country’s population. 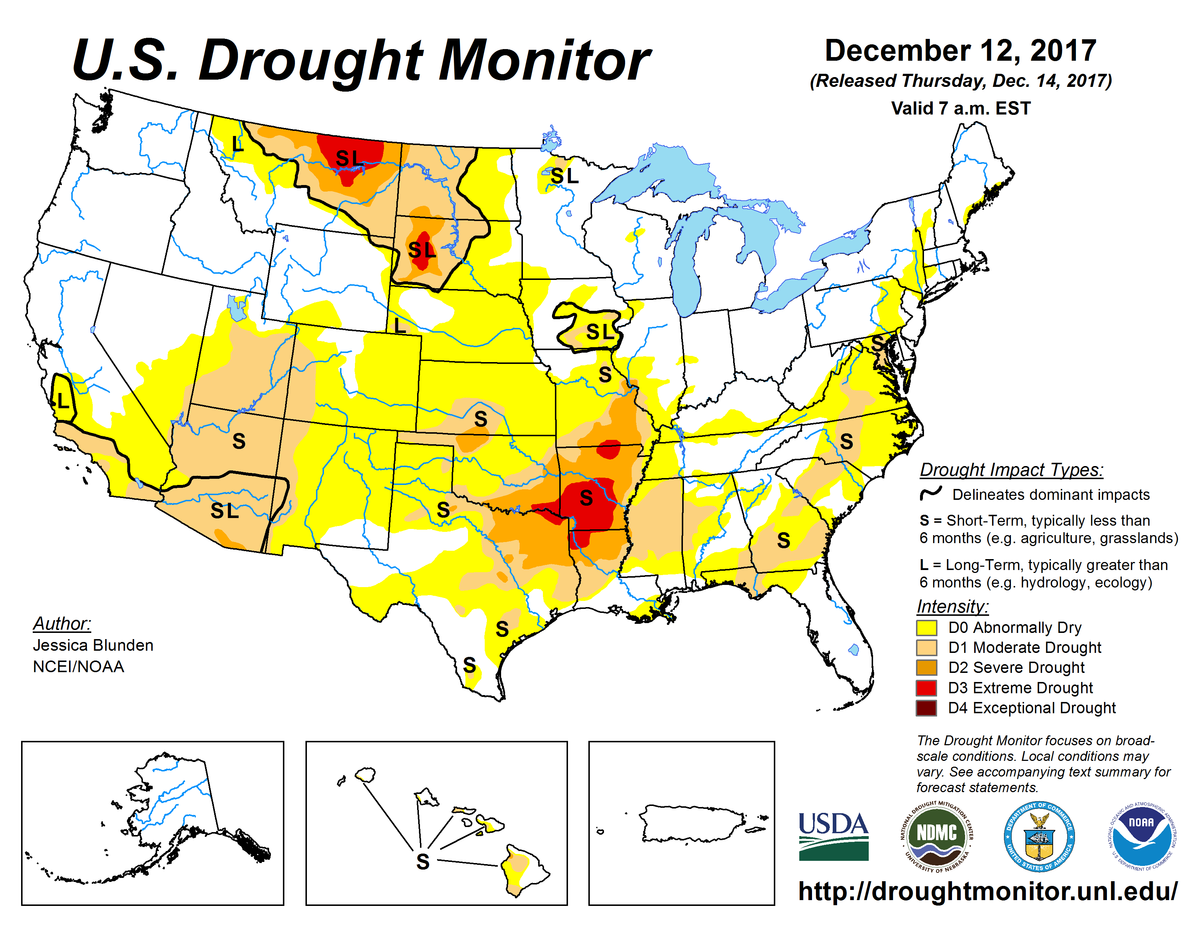 According to the August 18 U.S. Drought Monitor, moderate to exceptional drought covers 30.6% of the United States including Puerto Rico.

According to the February 12 U.S. Drought Monitor, moderate to exceptional drought covers about 13.6% of the U.S.

According to the April 18 U.S. Drought Monitor, moderate to extreme drought covers 8.2% of the contiguous U.S.