According to the December 31, 2019, U.S. Drought Monitor, moderate to extreme drought covers 9.5% of the United States including Puerto Rico, a decrease from last week’s 10.5%. The worst drought categories (extreme to exceptional drought) stayed the same as last week: 0.1%.

The atmospheric circulation over the contiguous United States consisted of a strong upper-level trough over the West and ridge over the East. These steering currents pushed a strong surface low-pressure system and its associated fronts from the Southwest to the Great Lakes. The low and fronts spread above-normal precipitation across parts of the Southwest and much of the Plains to the Great Lakes and Ohio Valley. The precipitation fell as snow across the central to northern Plains and Great Lakes. With the precipitation concentrated along this storm track, much of the Pacific Northwest and Great Basin to northern High Plains, and Gulf Coast to Mid-Atlantic region, were drier than normal.

The western trough kept weekly temperatures cooler than normal, while a southerly flow, dry weather, and sunnier skies beneath the eastern ridge brought warmer-than-normal temperatures east of the Rockies. The precipitation along the storm track contracted drought and abnormal dryness in parts of the Southwest and central to southern Plains.

Abnormal dryness and drought are currently affecting over 40 million people across the United States including Puerto Rico—about 12.9% of the popul 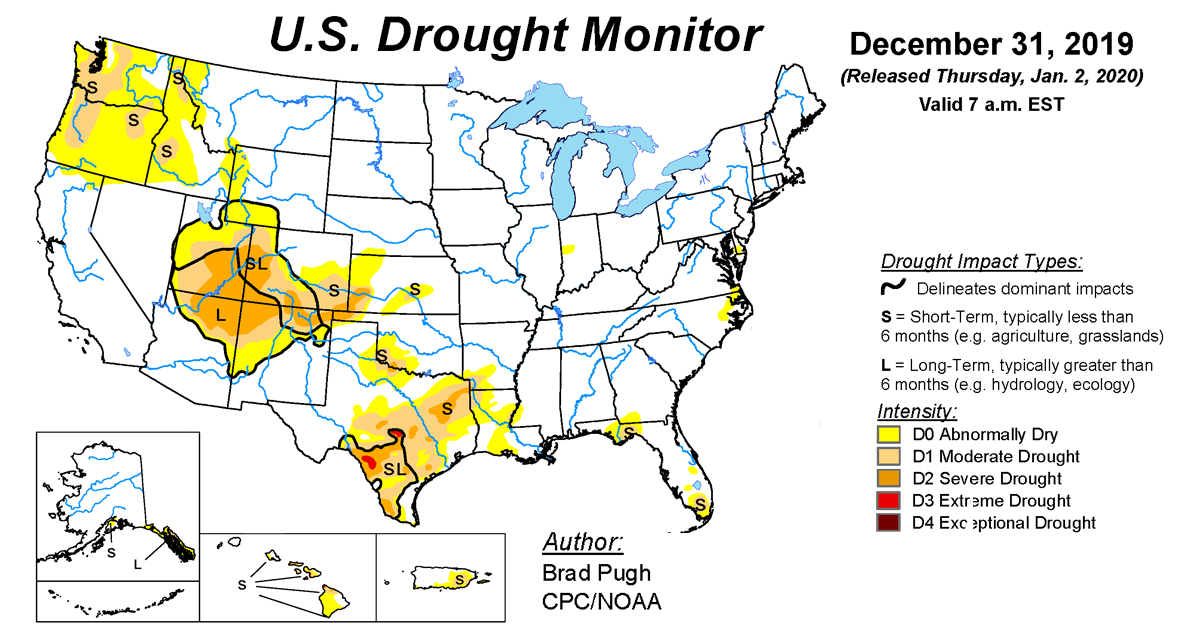 According to the May 5, 2020, U.S. Drought Monitor, moderate to extreme drought covers 13.4% of the United States including