A very strong upper-level ridge remained anchored across the western contiguous United States. Pacific weather systems tried to penetrate the ridge or ride over the top, only to be dried out and weakened. An upper-level trough over the eastern contiguous United States revitalized the weather systems once they exited the Rocky Mountain region. The systems tapped Gulf of Mexico and Atlantic moisture to bring precipitation to parts of the southern Plains, Southeast, and Northeast, but even that precipitation was mostly below normal.

The upper-level ridge over the West, and its associated dry northerly flow over the central contiguous United States, kept most of the West, Great Plains, and Midwest drier than normal with little to no precipitation falling in these regions. Weekly temperatures were warmer than normal over the central and northern Plains to Upper Mississippi Valley as well as New England.  Although Pacific weather systems penetrating the ridge did not produce much precipitation, they did bring clouds and cooler air with weekly temperatures near to cooler than normal across the West.

Clouds and precipitation brought cooler-than-normal temperatures to the Gulf Coast to Mid-Atlantic States. Precipitation contracted drought and abnormal dryness in parts of Texas and the Northeast, but drought or abnormal dryness expanded in parts of the West, Plains, Southeast, and Midwest. Drought expansion was more than contraction, so the overall U.S. drought footprint increased this week.

Abnormal dryness and drought are currently affecting over 139 million people across the United States including Puerto Rico—about 44.8% of the population. 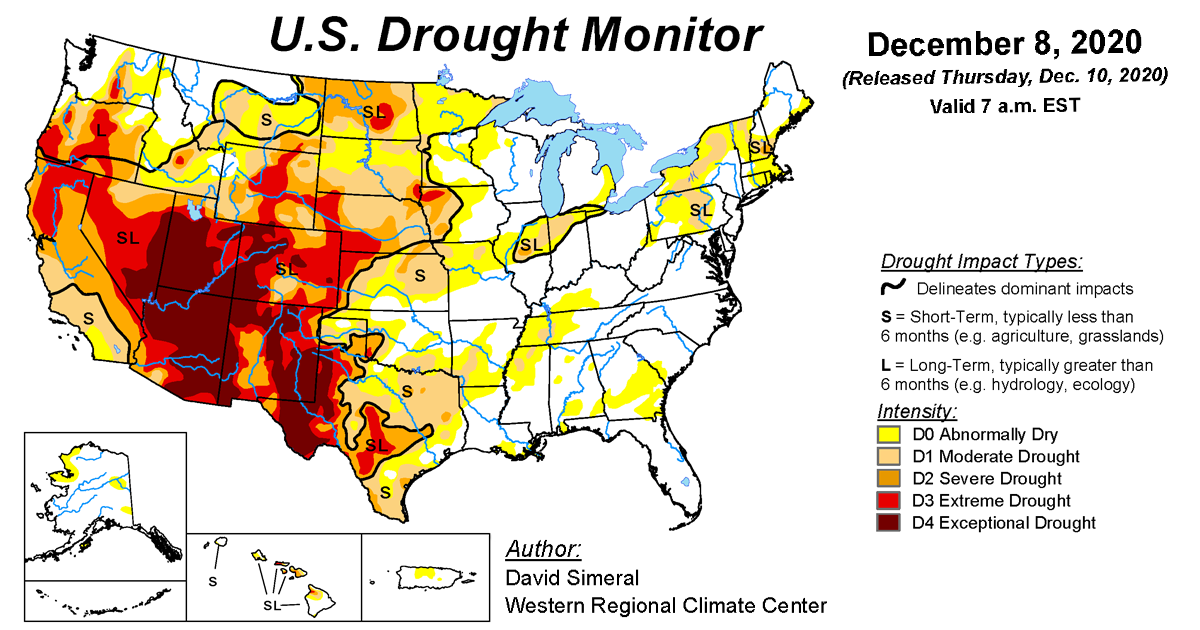 According to the January 7, 2020, U.S. Drought Monitor, moderate to exceptional drought covers 9.5% of the United States