So far this winter, the upper-level circulation seems to be stuck in a pattern consisting of a long-wave ridge over the western contiguous U.S. with numerous Pacific weather systems moving through the pattern in the jet stream flow. These weather systems, or upper-level short-wave troughs and closed lows, weaken as they cross the western ridge and are rejuvenated once they reach the Plains and move eastward. They tend to track along a southern trajectory, tapping Gulf of Mexico moisture as they move across the southern Plains and Southeast.

Clouds, precipitation, and cold fronts far to the south brought below-normal temperatures to the Southwest, southern Plains, and Southeast this week, while the ridge kept temperatures warmer than normal across the northern tier states. With wet weather in the South, drought and abnormal dryness contracted in the southern Plains and along the Oregon coast, but expansion occurred in parts of California, the northern High Plains, and Upper Midwest.

Drought contraction exceeded expansion, so the overall U.S. drought footprint decreased this week. Abnormal dryness and drought are currently affecting over 114 million people across the United States including Puerto Rico—about 36.7% of the population. 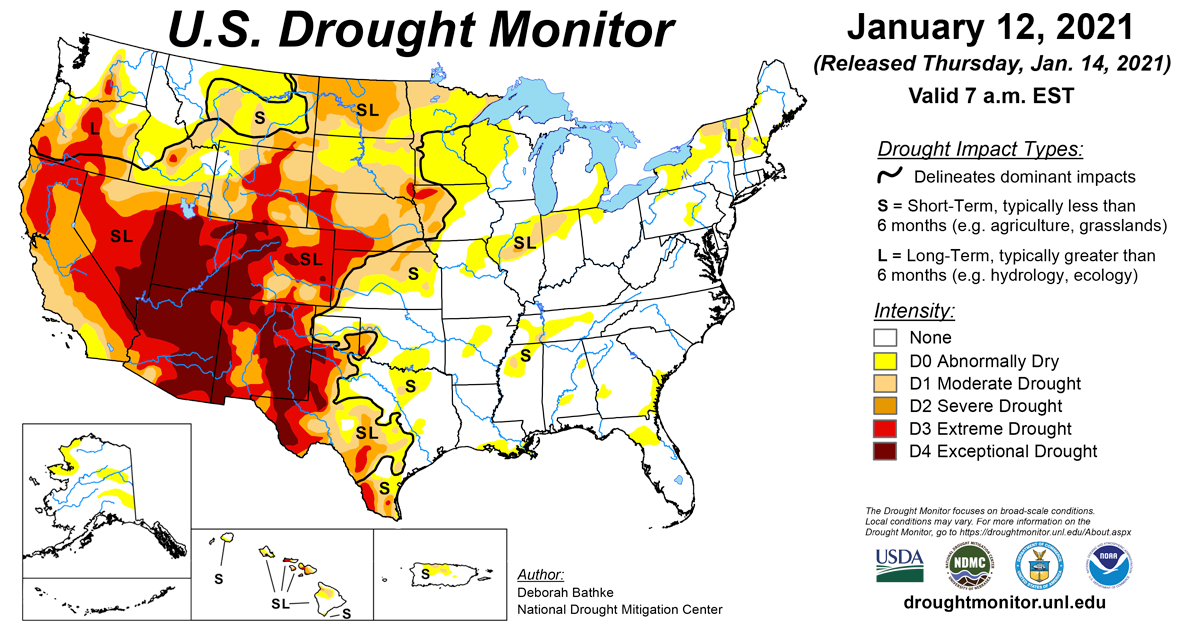 According to the July 4 U.S. Drought Monitor, moderate to extreme drought covers 8.5% of the contiguous U.S.

According to the June 16 U.S. Drought Monitor, moderate to extreme drought covers 19.6% of the United States including Puerto Rico.

According to the May 12 U.S. Drought Monitor, moderate to extreme drought covers 14.6% of the United States including Puerto Rico.

According to the February 5 U.S. Drought Monitor, moderate to exceptional drought covers 13.6% of the United States.