According to the January 30, 2018, U.S. Drought Monitor, moderate to extreme drought covers 38.4% of the contiguous United States, an increase from last week’s 35.4%. Extreme drought increased from 0.9% last week to 1.7%. And, exceptional drought remained absent from the Nation for a 16th consecutive week.

A weak ridge in the upper atmosphere tried to assert itself over the western contiguous United States during this U.S. Drought Monitor week, but Pacific storm systems moved through it in a stronger westerly flow. The ridge weakened the Pacific systems, limiting their precipitation to coastal areas from northern California to Washington, the upslope portions of the Sierra in northern California, and across the Pacific Northwest to northern Rockies. With the storm track across the northern tier states, the Southwest received no precipitation.

The Pacific lows and cold fronts were also dried out as they crossed the Rockies, leaving the Great Plains and Upper Midwest with little to no precipitation. But, they picked up Gulf of Mexico moisture as they crossed the Mississippi River Valley, dropping precipitation in areas from southeastern Texas to southern New England. In spite of these areas receiving precipitation, the week was wetter than normal only along the northern California to Washington coast, the northern parts of the Pacific Northwest, and parts of the Gulf Coast, East Coast, and Mid-Appalachia. The rest of the Lower 48 was much drier than normal.

With the ridge out west and an otherwise generally westerly flow, temperatures were above normal across most of the contiguous United States. The dryness this week was a continuation of severely dry conditions that have persisted for the last three to four months across much of the Southwest to southern Plains. Contraction of drought and abnormal dryness occurred in parts of the South to Mid-Atlantic where the heaviest rains fell, but drought expansion was the rule across the rest of the Lower 48.

Abnormal dryness and drought are currently affecting nearly 170 million people across the United States—about 54.5% of the country’s population. 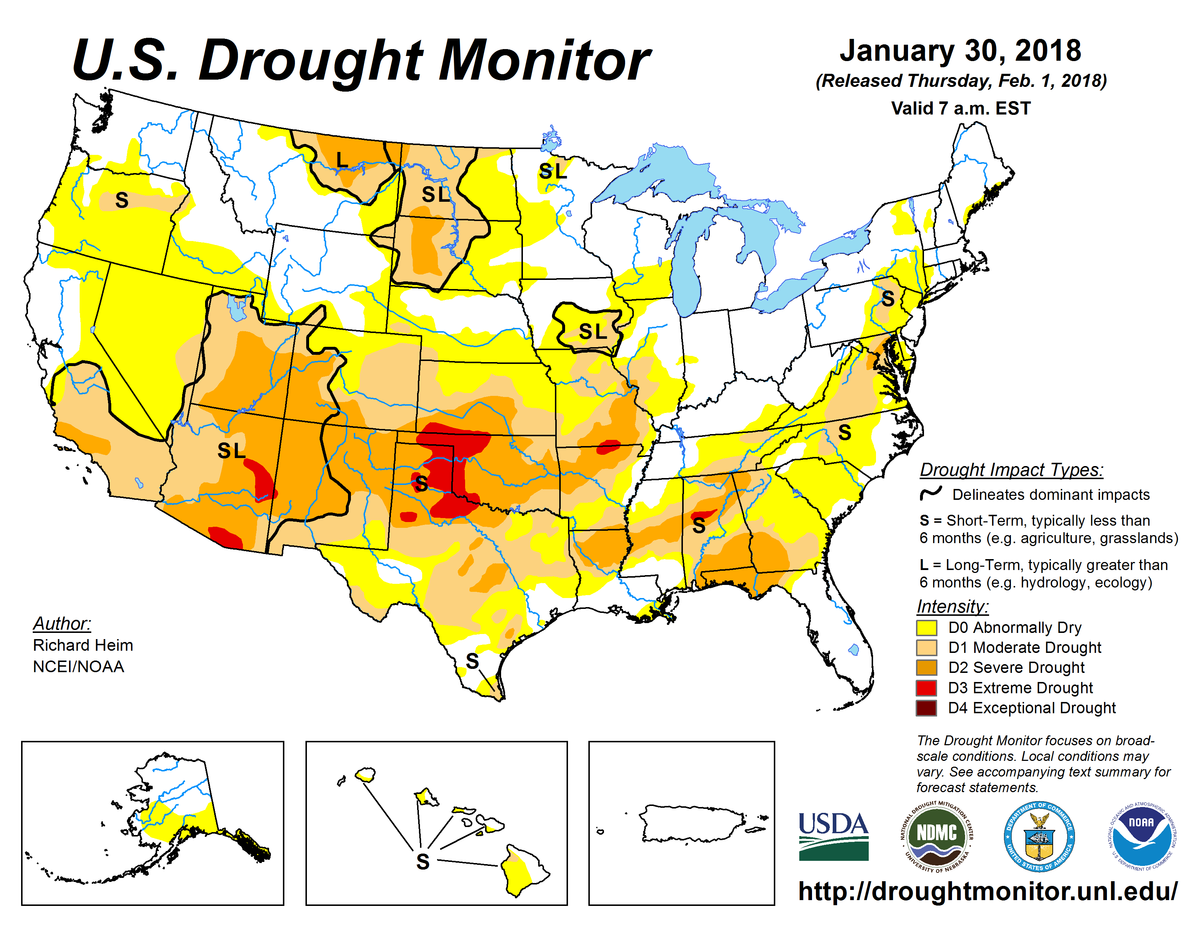 According to the March 27, 2018, U.S. Drought Monitor, moderate to exceptional drought covers 30.8% of the contiguous United

According to the August 10, 2021, U.S. Drought Monitor, moderate to exceptional drought covers 40% of the United States