According to the July 16, 2019, U.S. Drought Monitor,moderate to extreme drought covers 6.6% of the United States including Puerto Rico, an increase from last week’s 3.6%. For the ninth week in a row, the worst drought categories (extreme to exceptional drought) remain at 0.1%.

A strong high-pressure ridge became entrenched across the southern continental United States with the jet stream and storm track deflected to the U.S.-Canadian border region. Another ridge in the jet stream flow kept the weather warmer and drier than normal over Alaska. Pacific weather systems rippled along the jet stream, with their surface fronts and lows bringing above-normal rain to parts of the Pacific Coast, northern Rockies, and central Plains to Upper Great Lakes. Steered by the winds along the western end of the Bermuda High, poorly-organized tropical system Barry crawled across the northern Gulf of Mexico, eventually making landfall along the Louisiana coast as a brief hurricane; Barry then moved north along the Mississippi River. Barry left heavy rain in its wake in the Lower Mississippi Valley and into parts of the Southeast, with its rain and cloud shield keeping temperatures cooler-than-normal for the week from Louisiana to Kansas. Otherwise, the high-pressure ridge spread above-normal temperatures and drier-than-normal weather across much of the continental United States. In the western equatorial Pacific, a monsoon trough brought rain to drought-stricken parts of Micronesia.

As a result of this week’s weather pattern, drought and abnormal dryness contracted in parts of the northern Plains, Upper Midwest, Southeast, and Micronesia, but expanded in parts of the Pacific Northwest, southern Texas, and Alaska.

Abnormal dryness and drought are currently affecting over 30 million people across the United States including Puerto Rico—about 9.7% of the U.S. population. 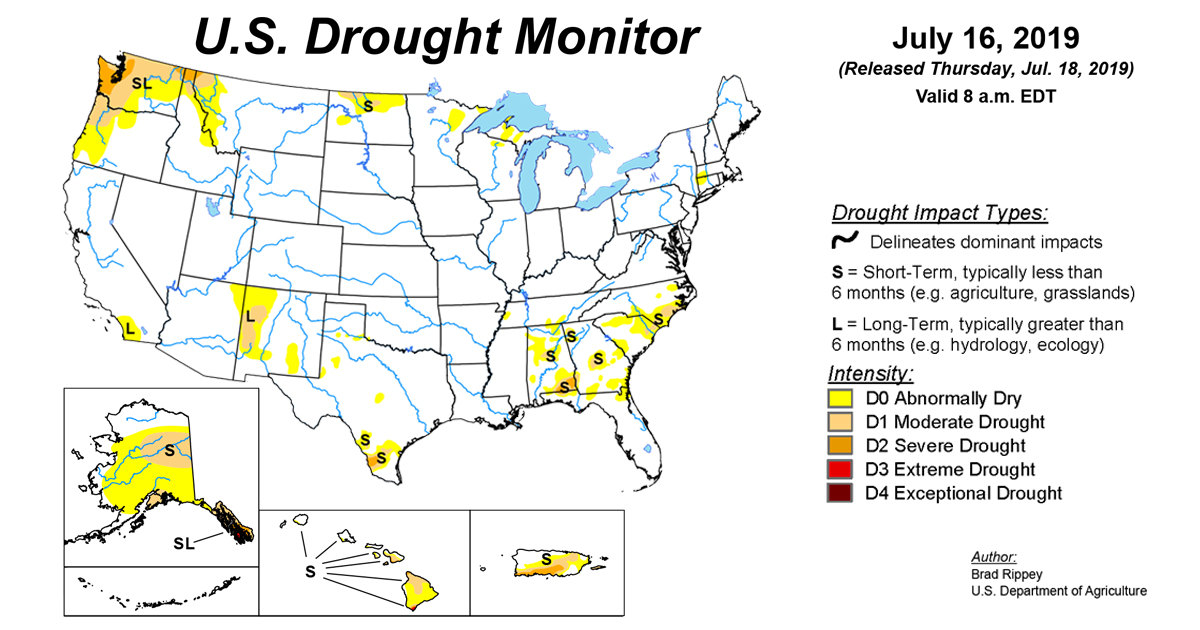 According to the May 9 U.S. Drought Monitor, moderate to extreme drought covers 5.2% of the contiguous U.S.

According to the June 30 U.S. Drought Monitor, moderate to exceptional drought covers 21.4% of the United States including Puerto Rico.

According to the January 19 U.S. Drought Monitor, moderate to exceptional drought covers 37.6% of the United States including Puerto Rico.