According to the July 21, 2020, U.S. Drought Monitor moderate to extreme drought covers 26.3% of the United States including Puerto Rico, an increase from last week’s 23.0%. The worst drought categories (extreme to exceptional drought) decreased slightly from 2.3% last week to 2.2% this week.

High pressure dominated the southern half of the contiguous United States. Upper-level weather systems tracked across the U.S.-Canadian border, dragging surface lows and fronts along with them. The frontal systems tapped Gulf of Mexico moisture to drop locally heavy rain across parts of the Plains to Midwest, while convective thunderstorms peppered coastal areas of the Gulf.

The high-pressure ridge inhibited precipitation across much of the southern Plains to Southeast, and across most of the West. It also kept temperatures unusually hot, with daily maximums exceeding 90°F across the South throughout the week and across much of the West for most of the week. The excessive heat spread into the northern Plains, Midwest, and Northeast as the week wore on. The persistent heat increased evapotranspiration, which dried soils and stressed crops and other vegetation. Locally heavy rains brought temporary relief from the heat and dryness, but only for those areas in the Plains and Midwest lucky enough to receive the rain.

Abnormal dryness and drought are currently affecting over 123million people across the United States including Puerto Rico—about 39.6% of the population. 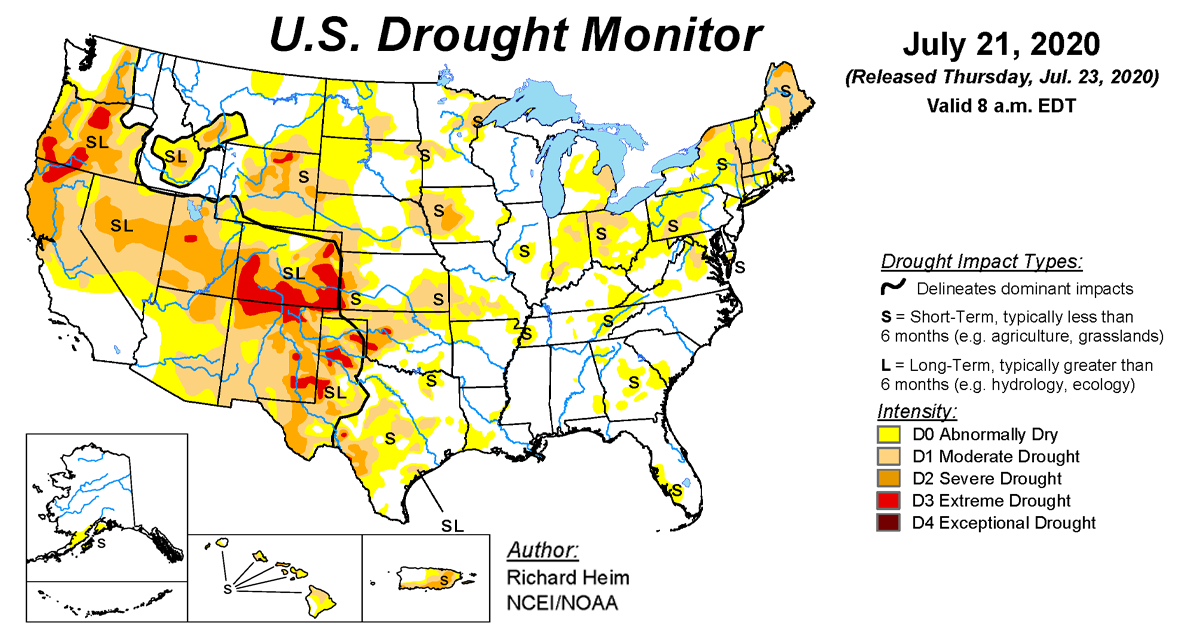 According to the August 11 U.S. Drought Monitor, moderate to extreme drought covers 28.8% of the United States including Puerto Rico.

According to the September 15 U.S. Drought Monitor, moderate to exceptional drought covers 32.8% of the United States including Puerto Rico.