According to the July 30, 2019, U.S. Drought Monitor, moderate to extreme drought covers 6.9% of the United States including Puerto Rico, an increase from last week’s 6.6%. For the 11th week in a row, the worst drought categories (extreme to exceptional drought) remain at 0.1%

A strong high-pressure ridge in the upper atmosphere was entrenched across the western continental United States and the Bermuda High-pressure cell was stronger than normal over the North Atlantic. A low-pressure trough took up residence in the eastern United States between these high-pressure ridges. Pacific weather systems in the jet stream flow moved across the western ridge, bringing precipitation to parts of the northern Plains and Upper Midwest. Their associated cold fronts got hung up beneath the ridge in the West, but they penetrated into the Midwest as they reached the upper-level trough.

The summer monsoon combined with the weakened fronts to bring precipitation to the Southwest, while scattered convection combined with remnant fronts to generate areas of precipitation along the Gulf of Mexico and East coasts. Other than these areas, precipitation for the week was below normal across most of the Pacific Northwest and Great Plains, and from the Deep South to Northeast. The trough and fronts brought cooler-than-normal temperatures to the southern Plains and Southeast, while the ridge kept temperatures warmer than normal across the Southwest. As a result of this weather pattern, drought and abnormal dryness contracted slightly in parts of the coastal Southeast, but expanded in other parts of the Southeast and parts of the Plains to Midwest. Rain from a tropical wave contracted or reduced drought and abnormal dryness in northeast to central Puerto Rico and in Saint Croix, while drought and abnormal dryness expanded in the southeastern part of Puerto Rico.

Abnormal dryness and drought are currently affecting over 35 million people across the United States including Puerto Rico—about 11.5% of the population. 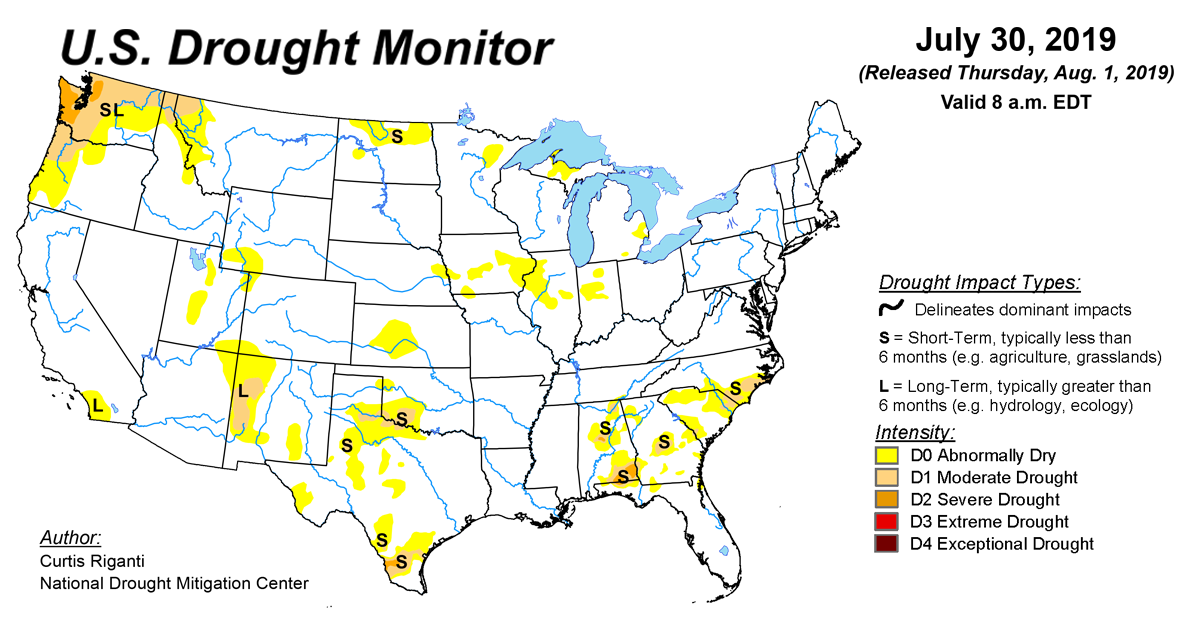 According to the January 2 U.S. Drought Monitor, moderate to extreme drought covers 27.7% of the contiguous U.S.

What remains the third most deadly tornado in U.S. history struck St. Louis, Missouri, on the afternoon of May 27, 1896.