According to the July 7, 2020, U.S. Drought Monitor, moderate to extreme drought covers 21.6% of the United States including Puerto Rico, a slight increase from last week’s 21.4%. The worst drought categories (extreme to exceptional drought) decreased from 2.1% last week to 2.0% this week.

Based on climatology and progression of the seasons, the main storm track retreats northward during the Northern Hemisphere summer. That was the case as upper-level weather systems and their surface lows and fronts mostly tracked along the U.S.-Canadian border. The weather systems favored the Pacific Northwest, creating a trough in the upper-level wind flow over the western contiguous United States while a ridge dominated from the Southwest to Great Lakes. This circulation pattern resulted in cooler-than-normal temperatures over the West and warmer-than-normal temperatures across the Plains and from the Great Lakes to Northeast. It also left much of the West, Great Lakes, and Ohio Valley drier than normal.

A couple surface lows and fronts stalled in the southern Plains to Southeast, and a tropical disturbance tried to get going along the Gulf of Mexico coast. These weather systems dropped above-normal precipitation across parts of the Plains, Lower to Mid-Mississippi Valley, and Southeast, and along coastal areas from the Mid-Atlantic to New England. The southern systems also moderated temperatures in the Southeast.

Drought and abnormal dryness contracted where it rained in the Plains and Mid-Mississippi Valley. But drought and abnormal dryness expanded in areas where low precipitation persisted, especially in parts of the Southwest, other parts of the Plains and Midwest, and across much of the Northeast. The national drought footprint increased this week as expansion outweighed contraction.

Abnormal dryness and drought are currently affecting over 112 million people across the United States including Puerto Rico—about 36.2% of the population. 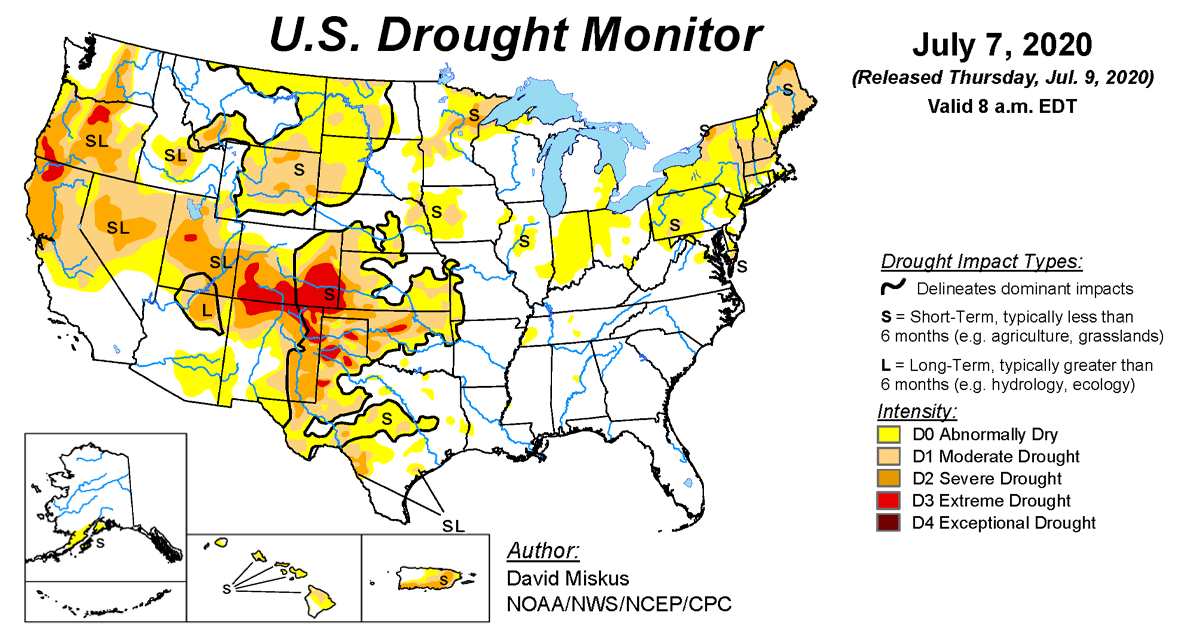 According to the August 13, 2019, U.S. Drought Monitor, moderate to extreme drought covers 6.8% of the United States including

According to the U.S. Drought Monitor report for May 11, the U.S. drought footprint now stands at 38.6%. The overall upper-level