According to the June 16, 2020, U.S. Drought Monitor, moderate to extreme drought covers 19.6% of the United States including Puerto Rico, an increase from last week’s 17.9%. The worst drought categories (extreme to exceptional drought) increased from 1.5% last week to 1.9%.

The upper-level circulation over the contiguous United States consisted of a cat-and-mouse game between a high-pressure ridge on the one hand and upper-level lows and troughs on the other hand. A couple of lows and troughs migrated out of the central contiguous United States at the beginning of the week, with new ones moving into the Pacific Northwest and East by the end of the week.

The eastern low became cutoff and lingered over the Southeast. The upper-level ridge bounced back, popping up in between the lows and reasserting itself over the areas that the lows vacated. As a result, weekly temperatures averaged warmer than normal across the central to northern Plains, where the ridge dominated, but cooler than normal to the west, south, and east. Surface lows and cool fronts associated with the upper-level troughs and lows brought above-normal rainfall to the Pacific Northwest, Great Lakes, and parts of New Mexico and the Mid-Atlantic and Southeastern States.

The week was drier than normal across the Southwest and Great Plains, Lower to Mid-Mississippi Valley, Ohio Valley, and Northeast. There was some contraction of drought and abnormal dryness where the rain fell, but much more expansion, especially in the West, Plains, and Ohio Valley.

Abnormal dryness and drought are currently affecting over 72 million people across the United States including Puerto Rico—about 23.2% of the population. 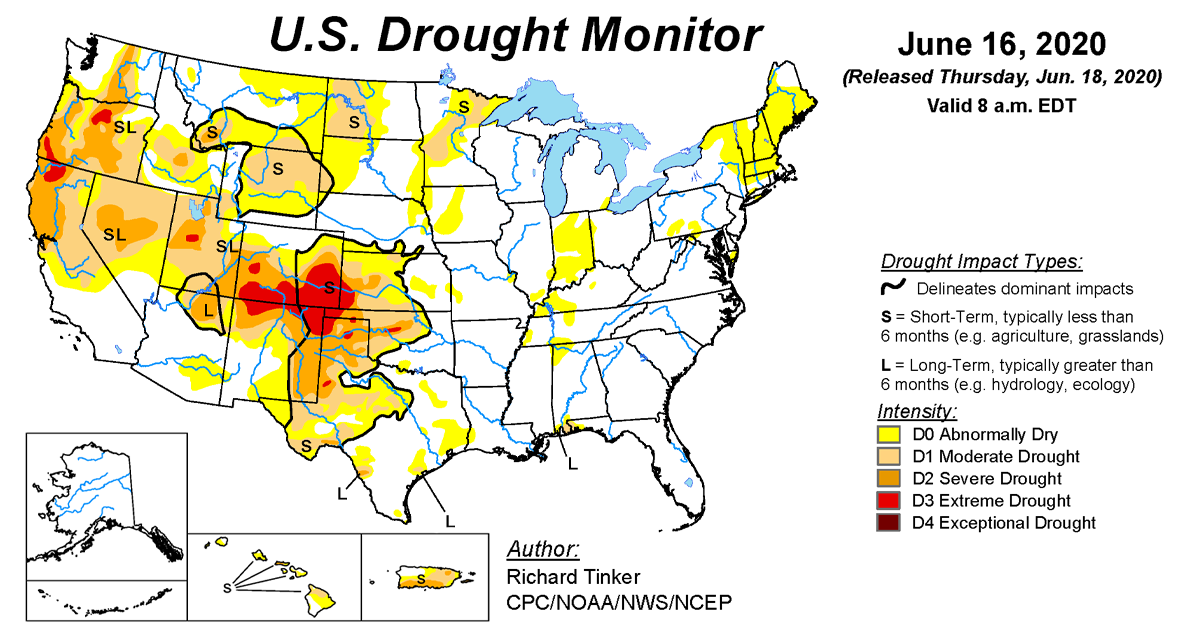 According to the November 10, 2020, U.S. Drought Monitor, moderate to exceptional drought covers 38.6% of the United States

According to the February 9, 2021, U.S. Drought Monitor, moderate to exceptional drought covers 38.4% of the United States