According to the June 23, 2020, U.S. Drought Monitor, moderate to extreme drought covers 21.4% of the United States including Puerto Rico, an increase from last week’s 19.6%. The worst drought categories (extreme to exceptional drought) stayed the same as last week: 1.9%.

The upper-level circulation over the contiguous United States was dominated by a couple of upper-level troughs or closed lows. One slowly moved out of the eastern contiguous United States during the first half of the week while the second migrated from the west coast to the Great Lakes during the week. The troughs and closed lows kept temperatures cooler than normal for the week across the Southeast and Great Basin to northern Plains.

An upper-level ridge of high pressure dominated the northeastern contiguous United States to southeastern Canada, while the North Atlantic subtropical high-pressure system was stronger than normal across Mexico, the Gulf of Mexico, and the Caribbean. The high-pressure systems kept temperatures warmer than normal and precipitation below normal over the northeastern contiguous United States, Puerto Rico, and the U.S. Virgin Islands.

A substantial and extensive Saharan dust plume moved over the Caribbean with its dry air and dust further inhibiting precipitation and keeping temperatures warm. Fronts and surface lows associated with the slow-moving upper-level systems dropped above-normal precipitation across parts of the northern Rockies, southern Plains to western Great Lakes, and Mid-Atlantic regions, improving drought and abnormally dry conditions. But most of the West and Northeast and other parts of the Plains to Midwest were dry this week, with the continued dryness resulting in expansion or development of drought and abnormal dryness. Expansion outweighed contraction this week, with the national drought footprint growing to 21.4% of the United States.

Abnormal dryness and drought are currently affecting over 77 million people across the United States including Puerto Rico—about 24.9% of the population. 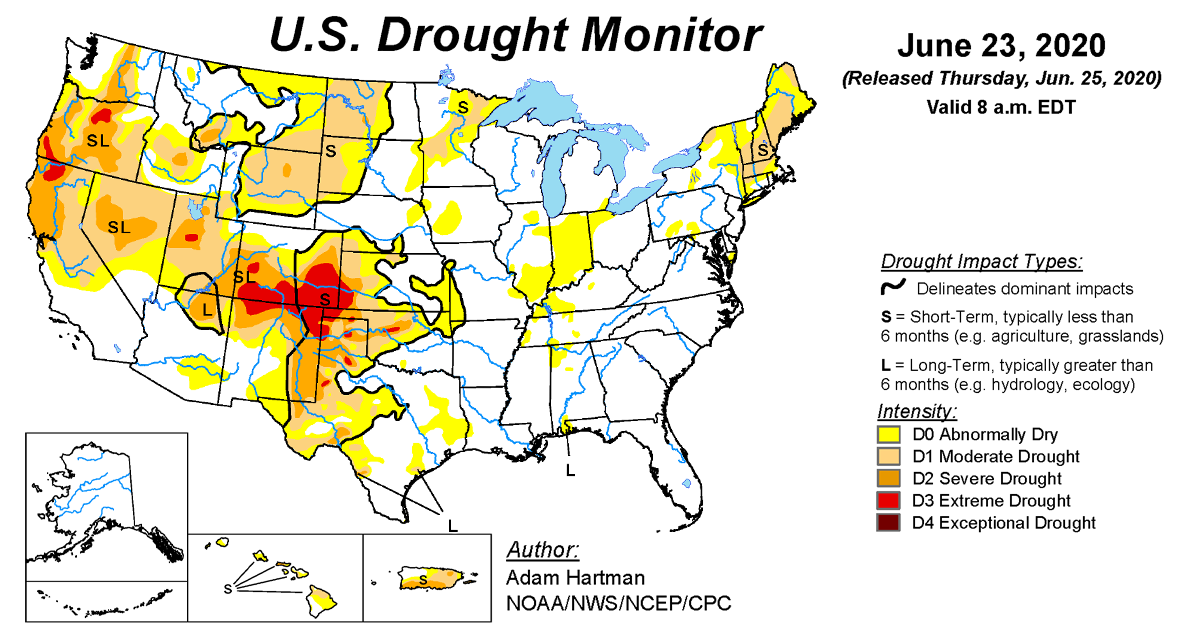 Numerous indicators and indices are used to characterize and assess drought. Their effectiveness and accuracy can vary

According to the May 17, 2022, U.S. Drought Monitor, moderate to exceptional drought covers 44.0% of the United States including