The atmospheric circulation over the contiguous United States consisted of a jet stream that was more westerly than previous weeks with several Pacific weather systems (short-wave troughs) that moved swiftly through it. The troughs favored the western contiguous United States while high pressure, centered over the Gulf of Mexico and Caribbean, pushed into the southeastern coastal states, bringing drier-than-normal conditions.

The Pacific troughs kept the West colder than normal for the week, while temperatures east of the Rockies averaged warmer than normal. Surface lows and cold fronts accompanied the Pacific weather systems, with some tracking across the northern states and others taking a more southerly route. The fronts and lows brought rain and snow to the Pacific Northwest and parts of the northern Plains to western Great Lakes, but the westerly flow left most of the West and Great Plains drier than normal for the week.

The lows and fronts that took a more southerly track tapped Gulf of Mexico moisture to spread above-normal precipitation across the Lower Mississippi Valley to Mid-Atlantic region. Drought or abnormal dryness contracted or lessened in intensity in areas where above-normal precipitation fell, but expanded or intensified in areas that continued dry.  Drought expansion was more than contraction, so the overall U.S. drought footprint increased this week.

Abnormal dryness and drought are currently affecting over 111 million people across the United States including Puerto Rico—about 35.7% of the population. 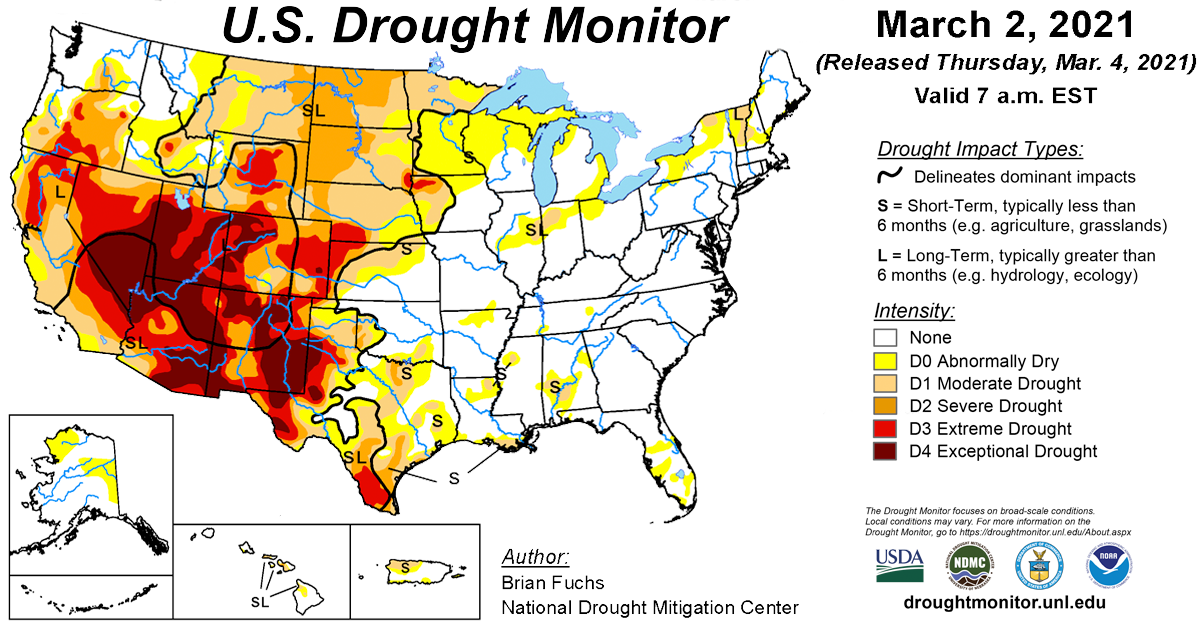 According to the June 14, 2022, U.S. Drought Monitor, moderate to exceptional drought covers 39.2% of the United States

According to the March 15, 2022, U.S. Drought Monitor, moderate to exceptional drought covers 51.1% of the United States