According to the March 26, 2019, U.S. Drought Monitor, moderate to severe drought covers 4.7% of the United States, a slight increase from last week’s 4.6%. The worst drought categories (extreme to exceptional drought) decreased from 0.3% last week to zero percent this week.

A large high-pressure ridge dominated the upper levels of the atmosphere over western North America with an upper-level trough over eastern Canada and extending across the East Coast. Powerful Pacific low-pressure systems penetrated the ridge and moved across the contiguous U.S. The Pacific systems dropped precipitation along their path, but the ridge reduced the amounts so only a few areas from California to the central Plains were wetter than normal.

Precipitation was above normal along the Mid-Atlantic Coast where the weather systems became re-energized as they moved into the upper-level trough. The western ridge tended to keep temperatures warmer than normal, but the clouds and precipitation with the Pacific weather systems cooled the air, so the western and central contiguous U.S. ended up with a temperature field that was warmer than normal in some areas and cooler than normal in other areas. As the weather systems crossed the Mississippi River and moved into the eastern trough, they pulled Canadian cold fronts in behind them to give the eastern third of the contiguous U.S. a colder-than-normal week.

This week’s circulation pattern confined the storm track to a belt along the middle of the country. With little precipitation outside this band, the Pacific Northwest to northern Plains, and southern Plains to Southeast, were drier than normal for the week. As a result, drought and abnormal dryness continued to contract from the Great Basin to Southwest, but expanded in parts of the Pacific Northwest and southern Plains to Southeast where dry conditions persisted. Acute precipitation deficits in March led to widespread expansion of abnormal dryness in Hawaii.

Abnormal dryness and drought are currently affecting almost 49 million people across the United States—about 15.7% of the country’s population. 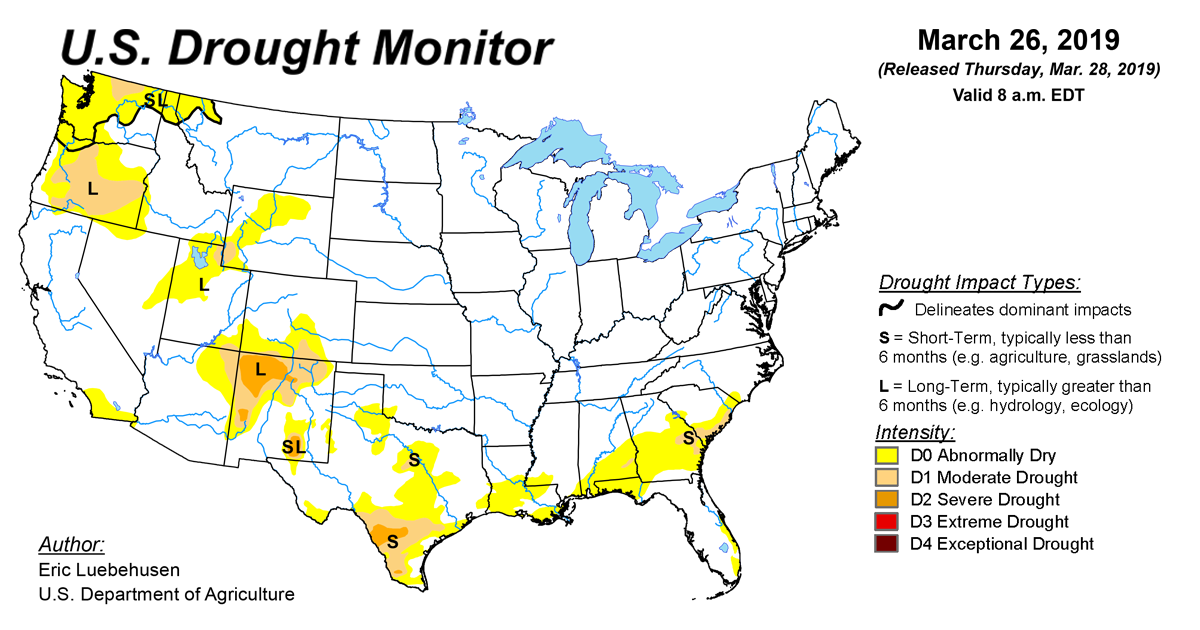 According to the August 31, 2021, U.S. Drought Monitor, moderate to exceptional drought covers 39.0% of the United States