According to the May 19, 2020, U.S. Drought Monitor, moderate to extreme drought covers 15.8% of the United States including Puerto Rico, an increase from last week’s 14.6%. The worst drought categories (extreme to exceptional drought) increased from 1.0% last week to 1.1% this week.

The upper-level circulation began with a zonal flow that transformed into a highly meridional flow by the end of the week. Large and strong upper-level low-pressure troughs intensified along the West Coast and in the Midwest, becoming cutoff lows that stalled out over these two regions by the week’s end. The upper-level lows, and their associated surface fronts and lows, dumped above-normal precipitation across California to the northern Rockies, from Texas to the Great Lakes, and across parts of Florida and the Carolinas. To complicate matters, Tropical Storm Arthur brushed coastal North Carolina with heavy rain. Colder-than-normal temperatures accompanied the above-normal rain.

Drier- and warmer-than-normal weather dominated between the upper-level lows, mainly in the Southwest. It was also drier than normal in the central and northern Plains and across parts of the coastal Southeast and Mid-Atlantic to Northeast. Rainfall was heavy enough to contract drought and abnormal dryness along the Gulf of Mexico coast and in parts of the Plains and Pacific Northwest. But another dry week resulted in expansion of drought or abnormal dryness in the Great Basin, Southwest to northern Plains, Puerto Rico, the U.S. Virgin Islands, and parts of Florida and Upstate New York, and expansion of abnormal dryness across most of Hawaii. Expansion outweighed contraction, so the national drought footprint grew to 15.8% of the United States.

Abnormal dryness and drought are currently affecting over 57 million people across the United States including Puerto Rico—about 18.6% of the population. 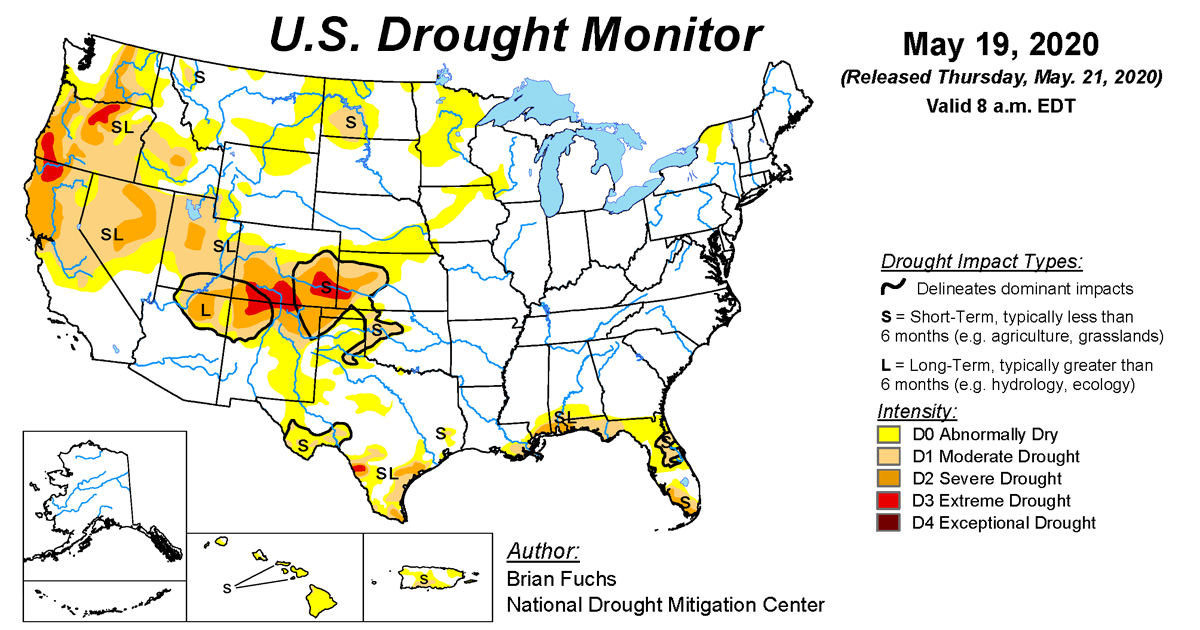