According to the May 21, 2019, U.S. Drought Monitor, moderate to extreme drought covers 2.7% of the total United States, an increase from last week’s 2.4%. The worst drought categories (extreme to exceptional drought) rose to 0.14% due in part to the introduction of extreme drought conditions in Alaska, breaking an eight-week national stretch of 0%.

With the elimination of severe drought from New Mexico, this week is the first time in the 20-year history of the U.S. Drought Monitor that the contiguous United States has been free of severe to exceptional drought. However, it also marks the first time that extreme drought has been analyzed for Alaska.

The atmospheric circulation was dominated by a large upper-level trough, which settled over the western contiguous United States and a ridge of high pressure which migrated from the Plains to Southeast. Several Pacific weather systems moved into the trough, bringing above-normal precipitation and cooler-than-normal temperatures to much of the West. The eastern ridge became anchored over the Southeast, keeping the weather warmer and drier than normal in that region.

The combination of the western trough and southeastern ridge created a strong southwesterly flow across the central part of the country that funneled energy and Gulf of Mexico moisture into the Plains. This flow also directed strong low pressure systems from the Southwest across the Plains and toward the Great Lakes region. These storm systems generated heavy flooding rains and severe weather along their track.

Abnormal dryness and drought are currently affecting more than 27 million people across the United States—about 8.7% of the country’s population.

Drought conditions for the United States hit a 20-year low on May 14, 2019. See how this low compares to the historically highest week on record, observed September 25, 2012. 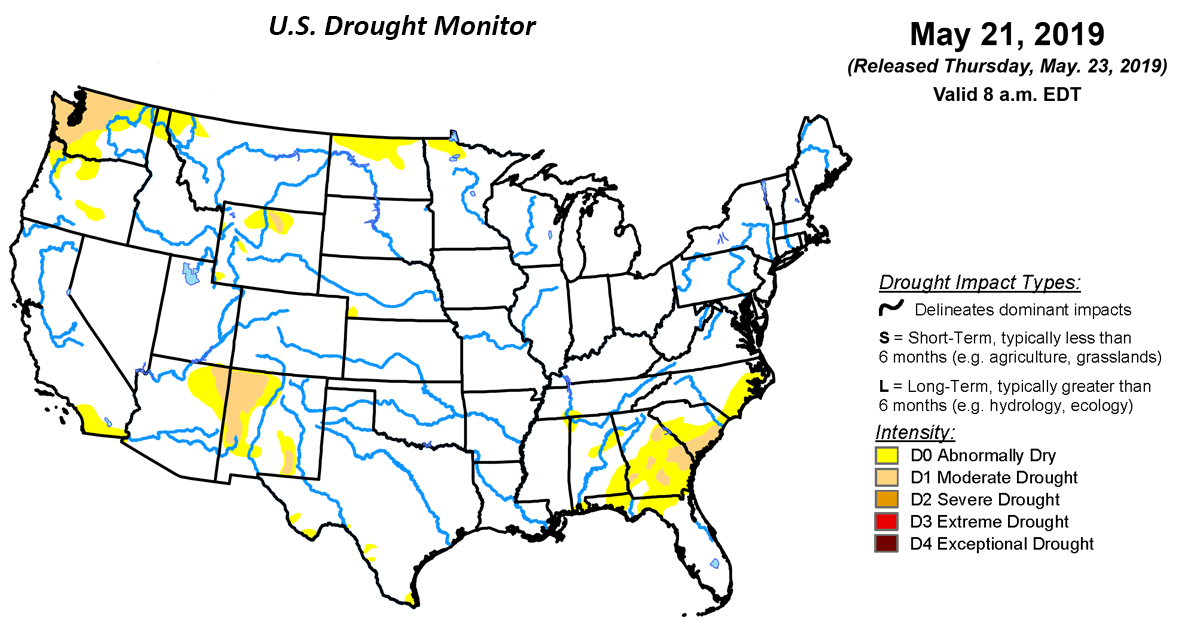 According to the July 28, 2020, U.S. Drought Monitor moderate to extreme drought covers 27.4% of the United States including

According to the December 24, 2019, U.S. Drought Monitor, moderate to extreme drought covers 10.5% of the United States