The atmospheric circulation began this week with a high-pressure ridge over central to western portions of the contiguous United States and a weak low-pressure system that moved out of the Southwest into the southern Plains. As the week progressed, a powerful low-pressure trough moved into the West. Due to jet stream connections, the western trough forced a large high-pressure ridge to build over the eastern half of the contiguous United States. From the West Coast to the Rockies, beneficial rain and snow fell as Pacific fronts and surface lows accompanied the upper-level trough. The trough, clouds, and precipitation left the Far West with near to below-normal temperatures for the week.

A southerly flow east of the Rockies, combined with the upper-level ridge, brought unseasonably warm weather to much of the country from the Rockies to the East Coast. This was especially true across the Midwest and Great Lakes where weekly average temperatures were 15 to 25 degrees above normal. The ridge kept most areas from the Plains to East Coast dry until the end of the week when rains from Tropical Storm Eta soaked Florida and a cold front brought precipitation to the Upper Mississippi Valley.

A high-pressure ridge kept Hawaii warmer and drier than normal. Drought conditions improved where above-normal precipitation fell in the Northwest and central Plains to Midwest. Drought and abnormal dryness expanded or intensified in the Southwest, southern Plains, and parts of the Midwest and Hawaii where dry conditions persisted. Drought expansion was more than contraction, so the overall U.S. drought footprint increased this week.

Abnormal dryness and drought are currently affecting over 120 million people across the United States including Puerto Rico—about 38.9% of the population. 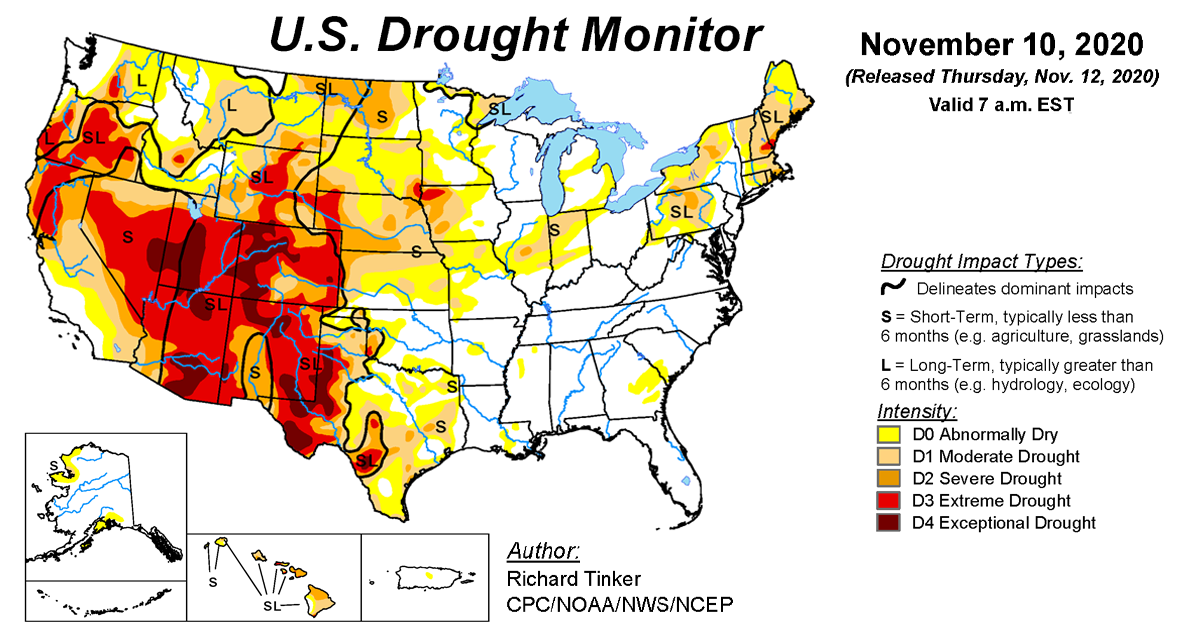 According to the December 10 U.S. Drought Monitor, moderate to extreme drought covers 9.5% of the United States including Puerto Rico.

According to the September 29 U.S. Drought Monitor, moderate to exceptional drought covers 35.8% of the United States including Puerto Rico.

According to the May 16 U.S. Drought Monitor, moderate to extreme drought covers 5.6% of the contiguous U.S.

According to the May 29 U.S. Drought Monitor, moderate to exceptional drought covers 22.1% of the United States.