A couple strong Pacific weather systems moved across the CONUS in an active jet stream flow. At the surface, deep low pressure systems followed a track from the southern and central Rockies, across the Plains and Great Lakes, to the Northeast. Cold fronts associated with the lows stretched from the Canadian border to the Gulf of Mexico and swept eastward across the country. The fronts and lows brought above-normal precipitation to several areas, including the central Rockies to northern Plains, southern Plains to eastern Great Lakes, and interior portions of the Northeast.

Much of the rest of the West, the Gulf of Mexico and Atlantic coasts, and the western Great Lakes were drier than normal. The western U.S. had a cooler-than-normal week beneath upper-level troughs, while the eastern contiguous United States was warmer than normal due to the dominance of upper-level ridging and southerly surface winds. Drought and abnormal dryness contracted in the northern and southern Plains, but expanded or intensified in parts of the Upper Mississippi Valley, northern parts of the West, and other parts of the southern Plains.  Overall, contraction exceeded expansion, with the nationwide moderate to exceptional drought area decreasing this week.

Abnormal dryness and drought are currently affecting over 107 million people across the United States including Puerto Rico—about 34.5% of the population 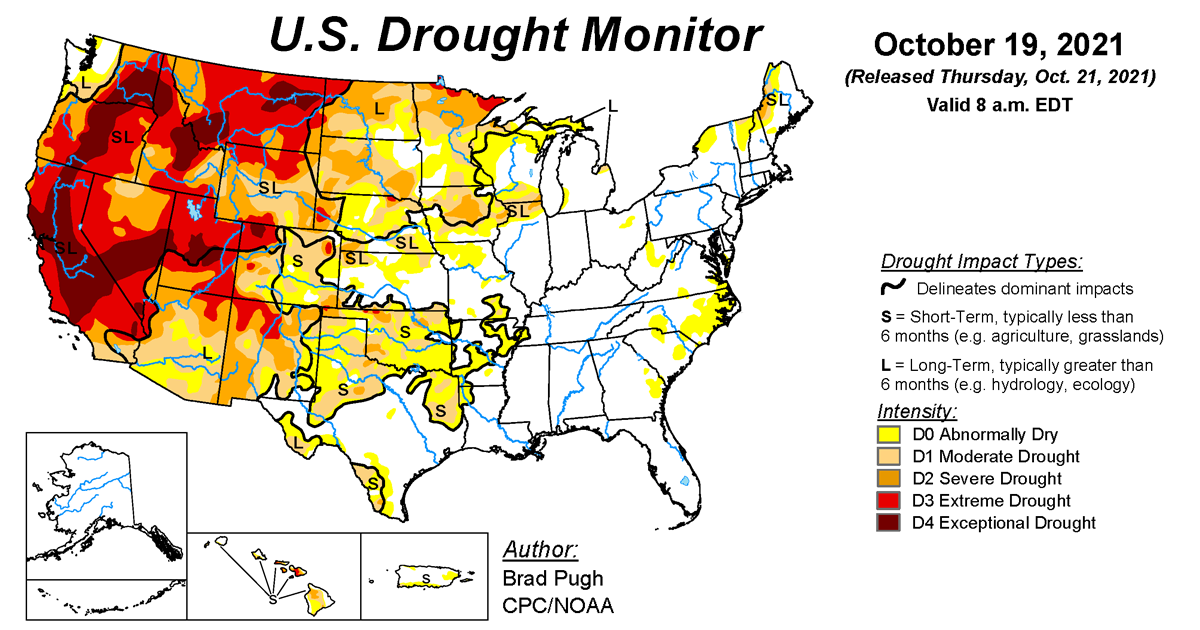 According to the June 29, 2021, U.S. Drought Monitor, moderate to exceptional drought covers 39.5% of the United States

According to the October 19, 2021, U.S. Drought Monitor, moderate to exceptional drought covers 38.9% of the United States