The atmospheric circulation was dominated by an upper-level trough of low pressure over central North America with upper-level ridges along the west and east coasts of the continent. This circulation pattern directed Pacific weather systems into the Pacific Northwest. The systems dropped above-normal precipitation across the northern Rockies and northern Plains.  The upper-level trough funneled cold and dry Canadian air masses into the contiguous United States east of the Rockies, with the cold fronts reaching all the way to the Gulf of Mexico coast.  The fronts generated above-normal precipitation along the Ohio Valley and picked up Atlantic moisture to soak parts of New England.

With a ridge and northwesterly flow aloft, most of the West and Plains were drier than normal. With the Canadian fronts mostly dry and Gulf of Mexico moisture mostly deflected away from the contiguous United States, most of the South, Southeast, and interior Mid-Atlantic to Northeast were drier than normal. Weekly temperatures were colder than normal with the Canadian air masses in the interior contiguous United States and warmer than normal beneath the ridge in the West and the ridge along the East Coast. As a result of this pattern, drought and abnormal dryness contracted in parts of the Northwest, Ohio Valley, and New England, but expanded or intensified in other parts of the West, Plains, Midwest, and interior Northeast, as well as Hawaii. Expansion exceeded contraction, so the overall U.S. drought footprint increased again this week.

Abnormal dryness and drought are currently affecting over 126 million people across the United States including Puerto Rico—about 40.7% of the population. 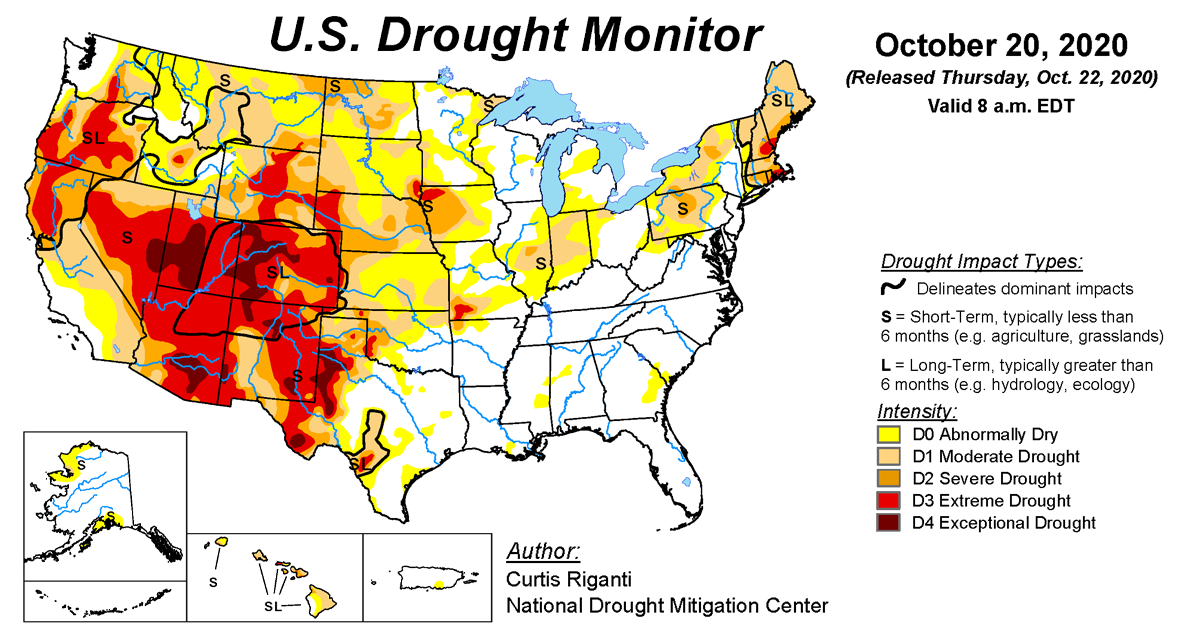 According to the May 19 U.S. Drought Monitor, moderate to extreme drought covers 15.8% of the United States including Puerto Rico.

According to the April 18 U.S. Drought Monitor, moderate to extreme drought covers 8.2% of the contiguous U.S.